The Ten Best Theatrical Films of 2009

An awful lot of films come through New York’s theaters, but most did not stick around for long. It is a pity many of the best films this year did not have more time to build word-of-mouth, but there is always the second life of DVD and emerging online delivery systems. What follows is a list of the top ten films conventionally released in New York theaters over the past year, in alpha order.

It was a good year for Japanese cinema, represented with three films on this list and the Best Foreign Language Film Oscar for Yojiro Takita’s Departures. Though a film dominated by Japanese funereal rituals might sound depressing, Departures is quite the opposite. It is ultimately life-affirming and hopeful film in which every element works together in beautiful harmony.

Even if you are a heretic who never adored the Broadway musical A Chorus Line (like me), after watching James D. Stern and Adam Del Deo’s Every Little Step, a behind-the-scenes film about the original 1975 production and the 2006 revival, you will share a genuine new affection for the long-running show. It is a special documentary that actually serves the much loved musical better than the 1985 film adaptation.

Oliver Hirschbiegel’s brutally honest Five Minutes of Heaven is not about forgiveness and it is not about redemption. With an unusually well written screenplay in which each word is carefully chosen, Heaven eschews cheap “Oprah moments,” instead illustrating how one act of violence can cause guilt and suffering that relentlessly compounds year after year.

Although Yoji Yamada’s Kabei: Our Mother certainly portrays the courage and dedication of a mother, it is a far-cry from a Hallmark card. Indeed, it is an eye-opening account of life for dissenters under World War II Japan, directed with graceful sensitivity by Yamada, one of Japan’s master filmmakers best known for the Tora-san series.

Andrzej Wajda’s Katyń may not be the illustrious director’s greatest film, but it is his most personal, exposing the Soviet massacre of 15,000 Polish prisoners of war (which included Wajda’s father). It is a searing depiction of mass murder that gives the audience no place to hide.

Perhaps it was not the most edifying film of the year, but it is hard to imagine a more cheerfully tasteless good time at the movies than Mark Hartley’s Not Quite Hollywood. This affectionate tribute to low budget sex and gore Ozploitation fare will not be to everyone’s tastes, but if you enjoy watching giant razorback hogs chasing half naked teenagers across the outback, you will heartily enjoy NQH’s merits.

Considering it is driven by conceptual ideas and dialogue, Slava Tsukerman’s Perestroika is surprisingly fast-paced and engaging. A former refusenik who eventually immigrated to New York, Tsukerman brings considerable insight to bear on the post-Glasnost Russian experience, as well as more cosmological questions in a dizzyingly intellectual film.

Deceptively subtle, Hirokazu Kore-eda’s Still Walking has a quiet power that lingers in the consciousness long after its initial screening. It is a painful realistic look at family dysfunction, where characters never really “have it out.” They just carry on as best they can. 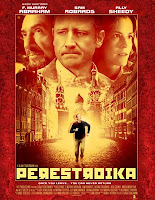 This might be a bold statement, but here it is: So Yong Kim’s Treeless Mountain features the greatest screen performance by a child actor, period. Utterly convincing and completely unaffected, Hee Jeon Kim is simply heartrending as an older sister forced by circumstances to grow up far too soon.

As usual, the leading Oscar contenders are a mediocre lot, but there were a good number of rewarding films that found their way into City theaters this year. While these ten may not have lit up the box office, they are excellent films that deserve to reach a wider audience over time. Here’s to happy screenings in 2010.
Posted by J.B. at 8:45 AM