Supposedly, 1950’s America was an era of stultifying conformity. Yet, it represents a breath of freedom for a group of galactic delinquents “sentenced to Earth.” They can only return when their leader commits a truly selfless act. However, one or two have rather mixed feelings about leaving their new world in Paul Bunnell’s mash-up The Ghastly Love of Johnny X (trailer here), which has its world premiere this Saturday at the 2012 Cinequest Film Festival in San Jose (and hey look, free posters for the first 100 audience members).

Johnny Xavier is a bad kid, but when the stern Grand Inquisitor pronounces his banishment, it temporarily breaks his hardened tough guy exterior. He seems to acclimate just fine on Earth though, leading his gang of Ghastlys as the rumble about dusty southwestern burgs. Gone are the Liberace outfits of their home planet. It is now strictly a Fonzy wardrobe for Xavier, a.k.a. Johnny X, with one exception. He is dead set on reclaiming a powerful telekinesis suit stolen by his ex-girlfriend, Bliss. Things get complicated as their quarrels sweep up a smitten soda-jerk (who will hear the “jerk” part emphasized many times over the course of the film) and an aging (or somewhat dead) rockabilly star.

There are also musical numbers that are necessarily goofy, but considerably better than one might expect from an aesthetic standpoint. Clearly, Bunnell and everyone else he convinced to appear in Ghastly have a real love for the B-movie alien invasion genre. Arguably most significant to fans is the final screen appearance of Kevin McCarthy (fondly remembered as the protagonist of the original 1956 Invasion of the Body Snatchers). Sadly, McCarthy passed away soon after completing his work as the Grand Inquisitor, but his commanding presence is undiminished in Ghastly. Clearly in on the joke, he plays it to the hilt, which is cool.

Frankly, Ghastly has a far more notable cast than viewers might expect. As local late night talk show host Cousin Quilty, Paul Williams is rather funny, while also proving he is indeed still alive. Creed Bratton of the Grass Roots (the band) and The Office (the television show) also gets to ham it up as the late but still rocking Mickey O’Flynn. On the other hand, Ghastly’s proper leads are not especially charismatic, but they can dance and carry a tune well enough. 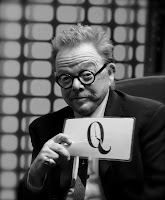 Bunnell helms the retro goofiness with brisk clarity, but perhaps he has too much affection for the films he is sending up, treating his characters and their situations rather gently. Still, there is plenty of room for viewers to insert their own jokes, which may be the whole point. A nostalgic valentine to early Roger Corman and his contemporaries rendered with greater style than thematically related films like R.W. Goodwin’s Alien Trespass and Madeleine Olnek’s Codependent Lesbian Space Alien Seeks Same, Ghastly should find an appreciative genre audience when it premieres this Saturday (3/3) at the California Theatre. It also subsequently screens at the San Jose Repertory Theatre on Tuesday (3/6) and Saturday (3/10) as part of this year’s Cinequest Film Festival.
Posted by J.B. at 7:00 AM