Kenzo Okuzaki conducted one of the most reckless murder investigations ever. He suspected two privates in his old regiment were executed to cover up something nefarious. He ought to have a nose for such things. He served ten hard years for murdering a real estate agent. The combination of his moral outrage and erratic behavior is fascinating to behold in Kazuo Hara’s The Emperor’s Naked Army Marches On, which screens this Sunday as part of Extreme Private Ethos, the Asia Society’s film retrospective surveying uncompromisingly intimate Japanese documentaries.

Getting an exact bead on Okuzaki’s ideology is tricky, but there is no question he despises the then Emperor. In addition to his murder wrap, he also did time for shooting a slingshot at the palace and distributing pornographic leaflets with the Emperor’s likeness. He is not subtle, nor particularly restrained, but he is not necessarily wrong about the suspicious executions in the 36th Regiment.

As he questions the surviving players, first with the sister and brother of the presumed victims in tow, later to be replaced by his wife and an anarchist colleague “playing the parts,” a number of disturbing facts are established. He conclusively establishes the men were shot after the war ended. He also kicks lose a lot of speculation about cannibalism within the ranks. While he never uncovers the precise source of the fire, he certainly finds a lot of smoke.

When talking fails, Okuzaki often lashes out physically. Yet, at times when he actually gets his interview subjects to open up, he interrupts them to assert his moral superiority. In short, he is sort of a nut, yet he appears to be on the right track.

An inspiration to Michael Moore (but don’t hold that against him), Hara’s approach throughout Army is deceptively straight forward. Filmed over a five year span, the documentary largely consists of Okuzaki’s slow building interrogations that frequently seem to erupt into mayhem out of nowhere. It definitely seems the filmmaker tries to keep Okuzaki’s volatile nature somewhat under wraps, even with Army’s shocking but rather offhanded conclusion. 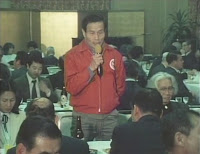 Clearly, Hara is not “playing it straight” in Army, preferring to side with a marginalized outsider of Dostoyevskian dimensions. It is rare that such a talky movie can be so unsettling. Indeed, Army is a bizarre viewing experience every serious doc watch should partake of. It screens this Sunday (3/25) as Extreme Private Ethos continues at the Asia Society.
Posted by J.B. at 6:00 AM