Film has clearly been a form of therapy for Naomi Kawase. Though experimental in nature, her documentaries have addressed some highly personal and painful family issues. While her themes are universal, the treatment and wincing pain of the search for her birth father and her complicated relationship with her adopted “mother” make the double bill of Kawase’s Embracing and Tarachime (roughly translated as “Birth Mother,” trailer here) arguably the least accessible program of Extreme Private Ethos, the Asia Society current series of acutely intimate Japanese documentaries.

Kawase has also made several acclaimed narrative features, including the quiet but deeply moving Cannes award winning Mourning Forest, but her reputation was forged with her documentary work. Essentially abandoned by both her long missing father and the birth mother who relinquished Kawase to her great aunt Uno (whom she calls Grandma), the filmmaker struggles with a sense of rootlessness in Embracing. Having traced her father’s whereabouts, she would like to re-establish contact, but her great aunt-grandmother-mother is against it. Somewhat conflicted, Kawase reconstructs her early childhood, but all she really has are a few old photographs and official census registrations. Ultimately, such evidence makes notions of family seem rather arbitrary, especially through Kawase’s warped lens.

Following the birth of her own child, Kawase examines her relationship with her adopted mother, directly rebuking the elderly woman’s emotional distance on-camera at critical juncture in Tarachime. Indeed, Kawase turns her focus away from nothing, including her son’s delivery, scenes of her great aunt in the ambulance and emergency room during a health scare, as well as brutally up-close shots of the ninety year old woman’s naked body. 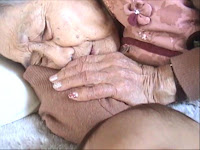 Whereas Embracing exhibits some intriguing avant-garde stylistic devices, Tarachime is more visceral and discomfiting. It is a hard film to watch on several levels. In contrast to her later narrative work, which might be deliberately paced but have a stately beauty deserving a considerably wider audience, these short docs should probably be reserved for cineastes whose tastes run towards non-narrative experimentalism. Brutally honest, they are still quite appropriate selections for Extreme Private Ethos. About forty minutes each, Embracing and Tarachime screen together this Sunday (3/18) at the Asia Society on New York’s fashionable Upper Eastside.
Posted by J.B. at 9:00 AM