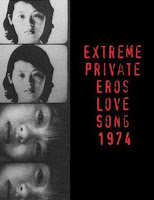 You might think you have seen some extreme behavior on reality television, but it is nothing compared to the Japanese counter-culture of the early 1970’s. Everyone has had awkward and demoralizing moments with their ex. Radical filmmaker Kazuo Hara edited his into a documentary. At one time he may have had a happy relationship with Miyuki Takeda, but happiness did not satisfy her. However, she allows Hara to film her most intimate moments. Ultimately, the collaboration between her contempt and his self-loathing became Hara’s 16mm Extreme Private Eros: Love Song 1974, which concludes Extreme Private Ethos, the Asia Society’s recent retrospective film series of uncomfortably personal Japanese documentaries, this Saturday.

Hara and Takeda had a young son together and viewers will feel for him quite acutely throughout the film. Wanting to maintain their connection, Hara and his camera invade her new life without him, but she allows it, apparently as a means of inflicting passive aggressive humiliations. Indeed, Hara willingly watches as she launches into an unstable lesbian relationship, moves to Okinawa to become a bargirl, becomes the submissive lover of an African American GI, and has someone’s baby (we not told whose). Hara’s spares the audience nothing, including a front-and-center, but slightly out of focus shot of her delivery.

Eventually moving into an urban commune for former bargirls and their children, Takeda tries to give her choices the patina of radical activism, but what happens on screen is really just a mess. When she forthrightly proclaims her preference for her biracial baby girl over her good natured toddler son, knowingly on-camera, it is rather quietly shocking. You have to feel for the young guy. To get back at his mother, he is probably now a conservative member of the LDP and a staid family man.

Frankly, the alternative lifestyles depicted in Eros make it pretty clear why the traditional ones have endured so long. The distinctly unprofessional midwifery practiced at the commune is particularly disturbing, but none of the choices made in the film appear to turn out well. 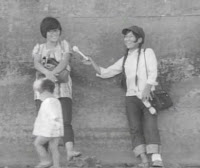 Eros is the sort of work that will leave viewers shaking their heads in disbelief. Again, one cannot help feeling sorry for the children born into this chaos. On the other hand, by the end of the documentary, most audience members will conclude Hara and Takeda deserve each other. A scalding antidote to early 1970’s counter-culture romanticism, but not exactly a barrel of laughs, Extreme Private Eros memorably concludes Extreme Private Ethos, the film series clearly titled after it, this Saturday (3/31) at the Asia Society on New York’s famous Park Avenue.
Posted by J.B. at 6:00 AM