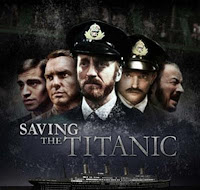 Trade unionism helped sink the Titanic. Of course, there was also an iceberg and an ocean full of water. Viewers will get a cogent explanation of how the celebrated ship sank as well as the heroic efforts made my her engineering crew in Maurice Sweeney’s documentary-narrative hybrid Saving the Titanic (promo here), which airs on most PBS stations this Sunday as part of Public Broadcasting’s commemoration of the 100th anniversary of the vessel’s maiden and final voyage.

Not to be spoilery, but Chief Engineer Joseph Bell and his men do not save the Titanic. Not long after she struck the iceberg, they knew her fate was sealed. Yet, they stayed at their posts below deck, working furiously to maintain power and forestall the inevitable, giving passengers more time to reach the life boats.

Though hardly high praise, it is worth noting Saving is significantly better than Cameron’s Titanic, particularly in the 3D fixer-upper form now looking to cash in with theater patrons. It is something of an odd blend of forms, periodically interrupting the below decks drama with charts and voice-over explanations of what exactly was going on from a technical standpoint. It might be a stylistic change-up, but at least it is often interesting. According, to Saving, there was a coal strike on at the time, which was significant to an entirely coal-powered vessel like the Titanic. As a result, she was stocked with cheap coal that was much more likely to combust spontaneously. This indeed happened, weakening her hull.

Probably the most recognizable face in Saving is that of Primeval’s Ciarán McNenamin, (at least) ten times manlier than little DiCaprio as lead fireman Fred Barrett. In a departure from his mad comic supporting turn in The Guard, David Wilmot gets to plays the hero this time as the dedicated Chief Engineer. In fact, the actors (and men they all are, no Kate Winslets in this telling of the Titanic tale) acquit themselves rather well, helping Sweeney establish the engineering crew’s unsung heroism. In contrast, the bridge crew’s reputation does not fare so well.

Evidently, there is a longer festival cut of Saving devoting more time to Catholic-Protestant divisions amongst the Irish crew. PBS viewers will be largely denied most of that, but there are no glaring holes in the broadcast version. Informative and engaging by casual television viewing standards, Saving is a shrewd bit of programming from PBS when it airs this Sunday (4/1) on most outlets nationwide.
Posted by J.B. at 7:15 AM