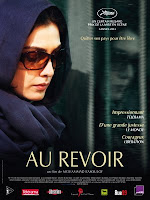 It is not exactly a common cultural zeitgeist, but immigration has become an increasingly frequent topic of both American and Iranian films. In the case of the former, viewers are asked to identify with those trying to enter the country illegally. For the latter, audiences watch as desperate everyday people try to get out, by any means necessary. Needless to say, getting into America is much easier (and safer) then leaving Iran. One expecting mother-to-be struggles with this grim reality in Mohammad Rasoulof’s Goodbye (trailer here), which screens during the 2012 New Directors/New Films, jointly presented by the Film Society of Lincoln Center and MoMA.

Noura was a human rights attorney in Tehran. Disbarred for obvious reasons, the only work now available to her is gift-wrapping. Her husband has been forced into an ambiguous exile up north, leaving her alone to deal with her pregnancy. This makes life particularly challenging, since Iran requires a man’s authorization for even the simplest medical procedures. Her baby is important part of the immigration scheme hatched by a dodgy passport broker. However, she is having doubts whether she should keep her. Yet, there is little to be done about it, without a husband’s permission.

Goodbye ought to be hailed as the international feminist watershed film of the decade. Yes, it directly addresses abortion, but the issues in question are far more fundamental than that single hot-button issue. As an unaccompanied woman, Noura is unable to undergo an ultrasound or check into a hotel on her own. Yet, she faces more than just gender oppression, which becomes clear when the police confiscate her satellite dish.

Facing a year in prison and the loss of his film production business, Rasoulof can clearly relate to such travails. Yet, he could at least authorize his own medical treatment—a fact clearly not lost on him. While he previously employed layers of allegory to obscure his social critique in the visual arresting White Meadows (edited by his colleague Jafar Panahi, with whom he was arrested in late 2010), Goodbye is a bold exercise in street level realism. Still, from time to time he conveys Noura’s psychological state with powerfully impressionistic moments more in keeping with the tone of Meadows (an insufficiently heralded modern masterwork).

Considering Marzieh Vafamehr was sentenced to ninety lashes for her thematically similar role in Granaz Moussavi’s My Tehran for Sale (reduced on appeal to three months in prison), Leyla Zareh’s performance is courageous on multiple levels. Rather than play to audience sympathies, she portrays Noura emotionally guarded to an almost soul deadening extent, for the sake of self-preservation. It is a harrowingly convincing turn.

Of course, Goodbye ends as it must, to keep faith with those who experienced what happens to Noura. As a result there are no real surprises in the film, just tragedy compounded. In truth, this will be somewhat familiar ground for those who have seen Moussavi’s film and Panahi’s The Circle, but Rasoulof’s execution is quite compelling and sensitive, nonetheless. Important as a document of contemporary Iranian life and as an aesthetically distinctive work of cinema, Goodbye is one of the clear highlights of this year’s ND/NF. Earnestly recommended, it screens this Thursday (3/22) at the Walter Reade Theater and the following Saturday (3/24) at MoMA.
Posted by J.B. at 9:30 AM