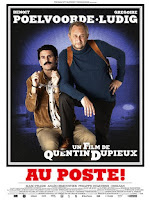 Commissaire Buron is the kind of cop who reminds us both the bumbling Inspector Clouseau and the cypher-like postmodern detectives of Alain Robbe-Grillet are French. He inspires little confidence, but he might just out Columbo Inspector Colombo, while turning reality on its ear in Quentin Dupieux’s Keep an Eye Out (trailer here), which streams as part of From France with Love, MUBI’s showcase of films selected by the 2019 My French Film Festival.

Buron is supposedly interrogating Louis Fugain, but his mind seems to be elsewhere. In fact, he seems rudely disinterested in the civilian, but he still perversely refuses to let the hungry civilian leave to get something to eat until he finished his statement. Oh, those civil servants.

Initially, we assume Fugain is there is a witness, but we eventually learn he is Buron’s prime suspect. Alas, Fugain’s version of events is such an unlikely series of Rube Goldberg events, it is hard to believe he made them up—unless, of course, he did. This is a Quentin Dupieux movie, after all, so all bets are off. Inconveniently, Fugain’s chain of unfortunate events continues beyond Buron’s field of vision, which forces him to do some desperate improvising.

Although Eye starts out as the smallest film of Dupieux’s filmography, in terms of scope, it does not take viewers long to discover how weird life is in Fugain’s world. We are talking even stranger than his playful confections Wrong and Reality. Unless you are deeply steeped in post-structuralist philosophy and the wacky excesses of contemporary pop culture, Eye will be a real head-scratcher of a viewing experience. It could even make older patrons’ heads explode.

Hopefully, they could still appreciate the bone-dry humor of Benoît Poelvoorde’s performance as Buron. He manages to segue from clueless bumbler to sinister authoritarian to apathetic shirker without breaking a sweat. Grégoire Ludwig maintains a similarly weird, hard-to-peg consistency as Fugain, while Marc Fraize also deserves credit for playing it scrupulously straight as Philippe, a rookie cop with an impossible to describe eye affliction.

Frankly, the police station setting and ostensive procedural narrative are highly compatible with Dupieux’s gamesmanship. You can see his kinship with works like Stoppard’s The Real Inspector Hound and Flann O’Brien’s The Third Policeman, but Dupieux has a flair for visual mischief that is all his own. That is what makes his films so amusing. Recommended for fans of his surreal head-tripping comedy, Keep an Eye Out streams through February 18th on MUBI and via other platform partners of this year’s My French Film Festival.
Posted by J.B. at 6:00 AM