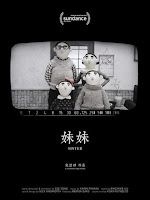 If you have a solid grounding in recent history and global politics, you should be able to guess the devastating twist that comes at the end of this stop-motion animated short film. A grown man looks back on his childhood, growing up with the little sister who was born four years after him in China, during the early 1990s. If you don’t get it by now, you certainly will be the end of Siqi Song’s beautifully rendered Sister, which screened during the 2019 Sundance Film Festival.

It is only eight minutes long, but it packs quite an emotional wallop. There is no question Sister is a highly personal statement from the Chinese-born, Los Angeles-based Song, who is credited as director, producer, screenwriter, animator, cinematographer, editor, and art director. Still, she did not do it alone. Her collaborators include Bingyang Liu, who performed the sensitive voice-over narration and Karen Tanaka, who composed the classy score.

As the film opens, the narrator fondly remembers his bratty little sister, who often brought their parents wrath down on him with her own mischief. Yet, something seems a little off with this picture. Eventually, all will be revealed—and it will be a painful revelation—even for viewers who were expected it. (As a final hint, Nanfu Wang’s documentary at this year’s Sundance also addresses the same topic.)

Ultimately, Sister does indeed indict the Chinese government’s recent policies, but it is still essentially a deeply humanistic family drama. Song’s animation is quite skillful and her visuals are sometimes surprisingly fanciful, but that does not dilute the power of her message. Very highly recommended, Sister screened during this year’s Sundance Film Festival.
Posted by J.B. at 4:00 AM