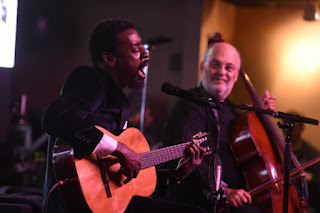 He was Pelé dos Santos, the Bowie singing crew-member in The Life Aquatic with Steve Zissou, the vengeful Knockout Ned in City of God, and Pelé’s dad in Pelé, but Seu Jorge is first and foremost a major MPB star. If you have him in your movie, you ought to take advantage of his chops, like Fernando Grostein Andrade did in his Sundance-selected film Abe. Not only did Seu Jorge play a major supporting role, he is also featured on the soundtrack and played an intimate 45-minute set at the ASCAP Music Café on Wednesday (as part of the programming of the 2019 Sundance Film Festival), backed only by the film’s music supervisor, Jaques Morelenbaum, on cello.

Technically, Jorge’s program of music from-and-inspired-by-the-movie Abe will not sound so familiar to anyone who just saw the film, but his fans recognized nearly every tune. For Brazilians, there were a handful of his old school hits, given a distinctly samba vibe from Jorge’s guitar and Morelenbaum’s cello. They also played a lightly swinging and downright jazz-like rendition of Gershwin’s “’S Wonderful” (the only English language performance of the set).

However, the centerpiece of the set was a trio of Jorge’s Bowie songs translated into Portuguese for Life Aquatic, which was a shrewd strategy, considering the Sundance audience’s likely familiarity with the Wes Anderson film. The stripped-down arrangement of “Rebel Rebel” is an absolute knockout that perfectly suits his deep baritone voice. “Life on Mars” sounded similarly haunting, in a way that is perfectly in keeping its Bowie roots. The same was generally true of “Ziggy Stardust,” but the slower tempo does not suit the melody as well.

Throughout the set, Morelenbaum’s accompaniment was tasteful and classy. The combination of guitar and cello was evocative of samba, as well as the coffeehouse and chamber music traditions. Even though Morelenbaum was definitely there in a supportive role, the standing-room-only crowd could hear the simpatico between the two artists.

The music on Abe is really quite different, but also very distinctive, including Jorge’s vocals on "Imigrantes" and Caetano Veloso’s “Meia Lua Inteira,” as well as Morelenbaum’s solo cello arrangements of Jobim’s “Brigas Numcas Mais” and “Samba de Uma Noto So.” All of the music associated (even distantly) with Abe is highly recommended and the movie is quite nice too (review to come). One thing is certain—Jorge’s ASCAP Music Café accomplished its mission, because it surely generated buzz and interest for the film.