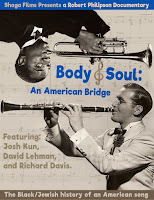 His name holds little recognition these days, even among serious jazz listeners, but Johnny Green won five Oscars for his film music and co-wrote several standards, including “I Cover the Waterfront” and “Out of Nowhere.” Yet, his best-known work is even more ubiquitous among jazz musicians’ repertoires. Robert Philipson chronicles the history and legacy of the beloved standard in the mid-length hour-long documentary, Body and Soul: An American Bridge (trailer here), which screens during this year’s Oxford Film Festival.

Green original co-wrote “Body and Soul” with lyricists Edward Heyman and Robert Sour for British musical theater performer Gertrude Lawrence, but it soon became a jazz standard. Naturally, one of the first classic renditions came from Louis Armstrong, who really did everything in jazz first. There was also a historically significant recording by the racially-integrated Benny Goodman Trio, featuring the great Teddy Wilson on piano. However, Coleman Hawkins’ legendary recording of “Body and Soul,” which most jazz historians consider the transitional link between swing and bebop is only mentioned in passing. Frankly, that is beyond bizarre, because we were eagerly anticipating a long discussion of Hawk (it isn’t perfect, but Ken Burns’ Jazz gets this right).

Still, Philipson deserves credit for giving Benny Goodman credit for sticking his neck out to lead his racially integrated trio (which became a quartet when he added Lionel Hampton on vibes). It is fashionable to mock Goodman for his legendary penny-pinching and the withering glare, dubbed “the ray,” he leveled at bandmembers who displeased him, but he took a risk and became an agent of progressive change in this country.

Instead of a bridge between swing and bebop, Philipson positions “Body and Soul” as a bridge between Jewish and African American musicians. He certainly has a strong case to make, but “Body and Soul” is hardly unique in this respect. After all, George Gershwin composed Porgy and Bess and Irving Berlin penned standards like “How Deep is the Ocean.” There are plenty of songs that could represent that sort of connection, but it almost always happens through jazz.

Regardless, any film that discusses Louis Armstrong, Benny Goodman, and Teddy Wilson at length is totally worth seeing. The best-known musicians Philipson interviews on-camera are probably NEA Jazz Master bassist Richard Davis and Loren Schoenburg, director of the National Jazz Museum in Harlem, who certainly know their stuff, but like it or not, no Marsalises this time around. Recommended for fans of pre-modern (swing, New Orleans) jazz, Body and Soul: An American Bridge screens this Sunday (2/10) as part of the 2019 Oxford Film Festival.
Posted by J.B. at 3:00 AM