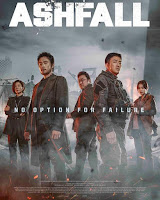 South Korea really shouldn’t send mixed messages to a psychopath like Kim Jong-un. After years of wishing his nuclear program would just go away, here comes a movie that suggests his nukes could be put to positive use. Admittedly, it also portrays the DPRK as basically a collapsed wasteland. The imploding North is giving up their nukes, but the South wants to commandeer them in a desperate bid to end a seismic and volcanic disaster in Lee Hae-jun & Kim Byung-seo’s Ashfall, which is now playing in New York.

For years, Korean-American scientist Robert Kang Bong-rae warned the government of a potential catastrophe, but they ignored him until it is now almost too late. He still has a plan, but it only has slightly over 3% chance of success. The beleaguered president and his first secretary Jeon Yoo-kyung still believe that is better than nothing, so they dispatch two commando teams to take possession of the DPRK nukes, while Kang runs simulations to increase the odds.

Fortunately, the warheads will be easy to collect, because the North just packaged them up for collection as part of their de-nuclearization agreement with the U.S. Yes, things have gotten that bad in the Workers’ Paradise. Jo In-chang was supposed to retire today, but instead he must lead the B-team backing-up the primary squad. Tragically, they must take the lead when the A-team’s plane crashes. Ironically, the North Koreans are almost passive spectators in all this, but China was deeply unhappy about peace breaking out on the Korean Peninsula, so they recruit Lee Joon-Pyeong, a North Korean double- or triple- or quadruple-agent to redirect the Nukes across the Chinese border.

Frankly, Ashfall is probably must notable for starring Don Lee/Ma Dong-seok in a non-action role, in an action movie. He is actually quite convincing as Kang, talking science instead of trash. His screen charisma still comes through. In fact, it shines brighter than Ha Jung-woo as Jo, the weirdly nebbish commando.

On the other hand, Lee Byung-hun goes convincingly dark and brooding as the profoundly disillusioned Lee. It is hard to believe Ha’s Jo can keep up with him. They just seem so mismatched, in every way. Most of the rest of the strike force are just stock characters (at best), but Jeon Hye-jin’s portrayal of Jeon, the political fixer, is intriguingly subtle. To her credit, former K-pop star Bae Su-zy brings more to the table than you might expect as Jo’s mega-pregnant wife, Ji-young.

Many of the earth-shaking effects are pretty cool and directors Lee & Kim stage some impressively elaborate action sequences. However, it is a real drag when the American military turns into the third act villains. Seriously, it will be hard for any veterans or relatives of veterans to cheer for the deaths of U.S. servicemen. Gee whiz South Korea—don’t we get enough of this kind of thing from China? It’s a real buzz kill and it makes no geopolitical sense either, especially with China flexing its imperialist muscles throughout Asia.

Don Lee and Lee Byung-hun are big stars, but you have to wonder why a new distribution line would opt to release a film with such a virulently anti-American bias—unless they just assumed the specialized film media would cover for them. Ashfall could have been a pleasant action diversion (albeit not nearly as entertaining as the poison gas thriller Exit), but it shoots itself in the foot with its prejudices. It should have been better than this. Disappointing for sucker-punch reasons, Ashfall is now playing in New York, at the AMC Empire.
Posted by J.B. at 6:00 AM