The Battle of Mosul & Peshmerga 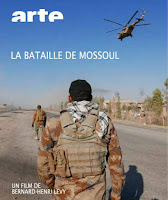 The Kurds have been betrayed by Trump, Bush I, and Obama, (who created the vacuum for Daesh to occupy in Iraq by prematurely withdrawing our troops, solely for domestic political reasons). Nevertheless, the Kurds keep fighting and keep hoping. French philosopher Bernard-Henri Lévy documented the brave Kurdish Peshmerga fighting force as it drove the Daesh (a.k.a. Isis) terrorists out of the autonomous Kurdistan region and neighboring areas of Iraq in The Battle for Mosul and Peshmerga, both of which open as a double-bill this weekend at the Quad.

Battle opens in October of 2017, with the Peshmerga army on a roll. It turns out the Isis terrorist forces are good at oppressing and torturing civilians and destroying the treasures of antiquity, like the tomb of the Prophet Jonah, which we see in ruins. However, they are not so hot at battlefield combat against a comparably armed foe. Their best strategies involve snipers and ambushes, but they continue to retreat in the face of the Peshmerga advance. Then, for a host of thorny political reasons, the regular Iraqi Army takes over the business of liberating the minority-Kurdish, Iraqi city of Mosul. At this point, the war gets far more complicated as the Iraqis get bogged down.

To some extent, it made sense the Iraqis should liberate an Iraqi city, but Lévy questions the wisdom of the strategy from the outset—and his is soon vindicated by battlefield realities. In Battle, Lévy goes further advocating complete independence and recognition for a Kurdish state than in his previous film, Peshmerga—and again, it is hard to argue with him based on the events he captures on film.

Lévy (or BHL as the media likes to call him) looks almost outlandishly out of place with his flowing mane and trademark tailored suit and white open collar, but you have to give him credit for putting himself in harm’s and keeping cool under fire—a lot of fire. He might be a philosopher by training, but he has more guts than most journalists filing their reports from the nearest Hilton.

Battle of Mosul is an eye-opening education in the boots-on-the-ground reality of the war against Daesh, but it is more like an extended dispatch from the field, whereas Lévy’s Peshmerga is more composed and structured like a documentary film. It is good that the Quad is programming them together, because they compliment each other and together give viewers a comprehensive sense of the Kurdistan and Mosul theaters of battle. They are both highly recommended, but Peshmerga is the superior film. My previous Peshmerga review follows below: 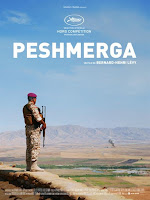 Peshmerga: The Kurdish homeland remains divided between four nations: Iran, Iraq, Turkey, and Syria. Sadly, these days Iraq is probably the friendliest nation of the quartet—and the one in the least position to object. Moderate Sunnis also appreciate the efforts of the Kurdish Peshmerga forces countering the advance of Isis. Is it time to call for the independence of a free, unified Kurdistan? Lévy indirectly but unmistakably raises that question in his remarkable documentary Peshmerga, which screens with The Battle of Mosul at the Quad.

These are the Kurdish resistance fighters who rose up against Saddam Hussein. It was also the Peshmerga who uncovered key intel that led to the capture and death of Osama bin Laden. Lévy flatly asserts they have been the most effective fighting force battling Isis (they prefer the term “Daesh,” which is good enough for us)—and he ought to know. For six months, the mediagenic BHL was embedded with various Peshmerga companies, with brief time out taken to tend to his wounded cameraman. Yes, they were very definitely under fire.

Understandably, BHL was reluctant to leave Ala Hoshyar Tayyeb during his initial treatment, but the time was not entirely lost. While waiting to either return to the front or shuttle his crew member to France for treatment, BHL visits an Assyrian Christian priest, who fled the Daesh onslaught along with his flock, the last native speakers of Aramaic let on earth, which just shows how closely linked this region is to antiquity.

Initially, viewers might presume Peshmerga was selected by several Jewish film festivals simply because of BHL’s Jewish faith, but the film takes on deeper Jewish resonance when Lévy visits a remote village that still takes pride in its ancient Jewish roots. Surely, the significance of the Muslim Kurds embracing ancestral links to Judaism is so self-evident, it hardly needs belaboring. As an additional fun fact, the Peshmerga are sufficiently progressive to have women’s platoons, whom Daesh particularly fear, because if they are killed by a woman they will supposedly be denied their place in paradise and those seventy-two virgins, so good hunting to the Peshmerga women.

BHL is indeed one of the most important living philosophers, but as an embedded journo, he captures episodes of warfighting comparable to anything in the films of Sebastian Junger. He introduces viewers to several Peshmerga commanders, who are colorful and . . . commanding. Sadly, we will also mourn for one of them. BHL conveys the shock of his loss, but still handles the incident with appropriate sensitivity.

Lévy is clearly a Peshmerga backer, but it is hard to blame him, given the boots-on-the-ground reality. Arguably, his upfront honesty on the subject is rather refreshing, while the film itself is enormously informative and persuasive. The Peshmerga are protecting their homeland, but they were also fighting our fight. They deserved better than they got from the last two administration. Very highly recommended, Peshmerga screens with Battle of Mosul, as part of the Bernard-Henri Lévy x 4 series at the Quad.
Posted by J.B. at 6:00 AM