Brace yourself for some extreme philately. Anyone who has seen Charade knows there are stamps out there that are valuable enough for people to kill for. That is why his under-achieving neighbor is rather confused when a sketchy Russian asks him to “hold on” to his rare stamp collection for an indefinite period. Confusion and moral dilemmas abound in William J. Saunders’ documentary The Penny Black, which premiered at this year’s Slamdance Film Festival, in Park City.

Will used to smoke with Roman on the sidewalk outside their Los Angeles apartments. He never really knew what the Russian did for a living precisely, but he definitely seemed to be a tough guy. Regardless, he had no idea why Roman asked him to hold onto a large collection of stamps. He even pointed out a few that had recently sold at auction for tens of thousands of Dollars. Shortly thereafter, Roman vanished from the neighborhood. A few weeks later, Will also moved out of his apartment, taking the stamp collection with him, because he did not know what else to do with it.

Trying to get a handle on the situation, Will makes halting attempts to appraise the collection, which includes the Penny Black, the world’s first stick-on stamp, issued by the UK in 1840. The value of the collection and Roman’s mysterious disappearance represent potential temptation for Will, who rather awkwardly finds himself revisiting his painful relationship with his father, a convicted con artist. 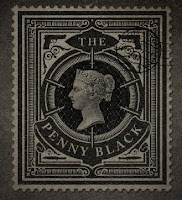 The weird tale of Roman’s stamp collection is intriguing, but Will is a problematic figure when it comes to carrying the film. Frankly, a development coming late in the second act largely sabotages all the trust we might have placed in him. Yet, on a more fundamental level, we start to distrust the documentary’s legitimacy, because so many scenes just do not feel right—meaning we suspect they might be staged. Will’s increasingly questionable behavior and motivations only fuel those doubts.

Arguably, the stakes throughout Penny Black are pretty small compared to the grand events currently shaking our world, but the possibility Roman could suddenly return acting like a Tarantino character maintains some level of viewer curiosity. This is definitely one of the odder true crime docs you might watch, if indeed there is a crime in there anywhere. We do not vouch for anything in The Penny Black, but the curious can check it out when it screens again this Tuesday (1/28), during Slamdance 2020.
Posted by J.B. at 3:00 AM