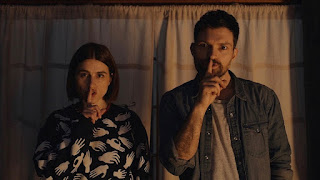 There is a long tradition of telling scary stories, but getting well-paid for it is a relatively recent phenomenon. Seriously, can you imagine explaining to Poe and Lovecraft how much money Stephen King makes? That is the sort of success Fanny has achieved and Fred aspires to. Alas, he simply isn’t in her league when it comes to writing talent, but he manages to hang with her for a while when she challenges him to dueling campfire stories in Josh Ruben’s Scare Me, which premiered at the 2020 Sundance Film Festival.

Fred has checked into a remote cabin hoping to finally make headway on his first novel, so he is both excited and intimidated to discover Fanny is his nearest neighbor. Her zombie novel is a #1 bestseller, a fact she lords over him. Fanny loves to throw around jargon like patriarchy and “toxic masculinity,” so she takes sadistic pleasure in belittling Fred. He will take it up to a point, in the hope that some of her mojo will rub off on him. Reluctantly, he agrees to proposed night of improvised horror stories, despite her constant needling.

In a way, Scare Me is sort of an anthology film, in which Fred and Fanny act out their tales amid the simple but spooky cabin setting, with only some clever lighting and sound effects to augment the vocal performances and outrageous pantomiming. A bit of chemistry starts to develop, as the two vastly different writers egg each other on (getting a brief guest appearance from the pizza guy). Yet, there is always a looming sense that the sinister business of their stories could spill over into their reality at any time.

Ruben’s minimalist approach is refreshingly different. Arguably, it is sort of like a comedic analog to The World is Full of Secrets, but it is less elliptical. However, it is unclear whether Ruben is satirizing Fanny’s abrasively woke gender politics are endorsing them. That definitely means something is getting lost from page to screen, regardless of how you feel about the ideology in question.

Still, it is cool to see how Ruben and Aya Cash stand and delivery as Fred and Fanny. They take on numerous characters and monsters, like they could be Second City’s horror auxiliary. Of course, like any anthology, some stories are better than others and the overall concept runs out of gas before the final punchline kicks in. Nevertheless, it is nice to see a filmmaker try something new. Earning a mixed review, Scare Me screens again today (1/30) and tomorrow night (1/31) in Park City, as part of this year’s Sundance.