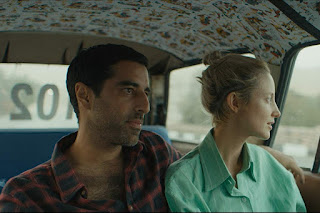 The stately Winter Palace Hotel in Luxor is due for a renovation, but the old carpeting and décor have a lot of character. It would almost be a shame to modernize it, like the old Plaza in New York, especially when so many of its guests are visiting to experience some kind of connection with Egypt’s ancient past. Hana once shared their interest, but she has returned hoping to forget her recent history in screenwriter-director Zeina Durra’s Luxor, which screens during the 2020 Sundance Film Festival.

Hana is a doctor working for a “Physicians sans frontiers” style NGO. She is clearly suffering from post-traumatic stress from her last posting near the Syrian border, but she has chosen not to deal with it. Instead, she quietly takes a few archaeological tours on her own, until she perchance happens to cross paths with her former lover, Sultan. Currently, he is working on a nearby dig with several mutual friends. Although romance is the last thing on her mind, their mutual attraction is undeniable.

Luxor unfolds slowly and obliquely, but there are violent emotions buried below its surfaces. It is an affecting love story, precisely because Durra’s characters are so deeply flawed and world weary. The film could definitely be compared to Ruba Nadda’s Cairo Time, but there is less romance and more existential angst. Throughout it all, the grand old Winter Palace provides a richly evocative setting.

Andrea Riseborough gives a fearless performance as Hana, fully committing to her defensive aloofness as well as her eventual meltdown. Her chemistry with Karim Saleh’s Sultan—smart, sensitive, but hardly saintly—is also quite potent.

Durra does not offer up any easy answers and she definitely never traffics in cheap sentimentality. For most part, her writing is lean and insightful, but she occasionally overdoes the New Agey spiritual flights of fancy. On the other hand, she makes tremendous use of Luxor’s monumental archaeological sites. In addition to the involving central relationship, the film offers up an undeniably cinematic tour of Luxor’s temples and tombs. Highly recommended for mature adults (for whom the themes of second chances and karma will resonate), Luxor screens Monday (1/27), Tuesday (1/28), Friday (1/31), and next Saturday (2/1) in Park City and Thursday (1/30) in Salt Lake, as part of this year’s Sundance.
Posted by J.B. at 11:00 AM