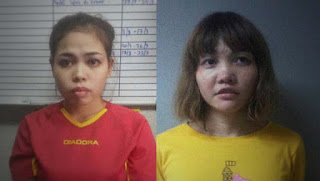 It is the stuff of a Hitchcock thriller, but Siti Aisyah and Doan Thi Huong have probably never heard of Hitchcock and they certainly never heard of the man they were tricked into killing. Kim Jong-nam happened to be the older brother of Kim Jong-un, who had expressed guarded skepticism of the Kim dynastic regime. That made him a threat that Kim intended to remove. Tragically, his agents duped Aisyah and Huong into committing the crime and then left them to face the music. Ryan White chronicles the attack and subsequent trial step-by-step, with the close cooperation of their defense teams, in the Kafkaesque documentary expose Assassins, which premiered at the 2020 Sundance Film Festival.

Aisyah is Indonesian and Huong is Vietnamese, but both came from mean circumstances. However, they were young, attractive, a very connected on social media. The latter is important, because it left a trail for the defense teams to follow later. In 2017, Kim Jong-un was ruthlessly purging anyone who could be a potential rival. Naturally, his estranged older brother was at the top of the list, but he was a difficult target, because China had granted him sanctuary (most likely to gain leverage over Prince Jong-un). That meant any assassination would have to take place outside China.

Prince Kim’s agents hatched an evil plan, recruiting Aisyah and Huong to ostensibly perform in prank video, in which they surprised unsuspecting targets by accosting them from behind and rubbing baby lotion on their faces. They filmed nearly a dozen dry runs, establishing the legitimacy of the videos with the naïve young women, but when it was time to punk Kim Jong-un in the Kuala Lumpur airport, they were lathered up with VX nerve agent instead. Of course, their North Korean masterminds immediately fled the country, setting their dupes up to take the fall. Frustratingly, the Malaysian legal system was happy to oblige, focusing their wrath on the women, instead of the North Korean government, or Air Koryo, which helped facilitate the agents’ escape.
These are the bare facts, which really only the Malaysian prosecutors disputed (seriously, how would the economically disadvantaged Aisyah and Huong acquire a sophisticated weapon like VX?). We watch the defense attorneys methodically build their counter-narratives and hear from the women themselves via phone interviews from prison. White’s talking heads also provide some eye-opening context on the royal Kim regime. It is not the primary focus of the film, but it is still valuable analysis.

Once again, the global community has allowed a repressive regime to violate international law and every standard of decency, without facing any consequences. The Malaysian government simply tried to railroad Aisyah and Huong, declining to take any action against the DPRK. (Even if they wanted to avoid a diplomatic kerfuffle, they could still sanction Air Koryo—and so should the rest of the free world).

This is a riveting film that establishes beyond any possible doubt the ruthlessness of the Kim regime, as well as their culpability (the Malaysian justice system does not come out looking very enlightened either). White’s telling of the tale maximizes the suspense for those who do not know the beat-by-beat history of the trial, without indulging in sensationalism. It is scary stuff that should serve as a bracing wake-up call. Very highly recommended, Assassins screens again this afternoon (1/28) and Saturday (2/1) in Park City and Thursday (1/30) in Salt Lake, as part of this year’s Sundance.
Posted by J.B. at 6:00 AM