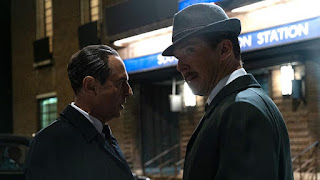 His father was an officer in the White Army, but Oleg Penkovsky’s military service during the Winter War and WWII earned him the trust and confidence of the Communist Party, allowing him to rise high in the ranks of the GRU (military intelligence). His decision to supply sensitive information about Khrushchev’s plan to deploy nuclear missiles in Cuba is considered a crucial turning point in the Cold War. (Plus, in Tom Clancy’s novels, he is also responsible for recruiting the titular double-agent in The Cardinal of the Kremlin.) Ppenkovsky played a risky game, but his partner was an amateur, Greville Wynne, recruited precisely because he would not act like a spy. Their cloak-and-dagger relationship is the focus of Dominic Cooke’s historical espionage thriller, Ironbark, which had its world premiere at the 2020 Sundance Film Festival.

In 1960, Col. Penkovsky (codename: “Ironbark”) was technically the chair of the Soviet Committee for Scientific Research, but his real duties were with the GRU. He was therefore privy to military secrets and present for many of Khrushchev’s bellicose tirades. The combination of the two convinced him the First Secretary’s policies represented a grave danger to the Soviet Union and the rest of the world, so he found a very clever method to reach out to the Yanks. Unfortunately, the CIA was particularly weak in Moscow after the detection and execution of their prime source, Major Pyotr Semyonovich Popov. That means CIA Agent Emily Donovan must work with MI6, who rather cleverly recruit businessman Greville Wynne, a sort of small-time Armand Hammer, who had already done deals in captive Warsaw Pact nations.

Since trade and technology fell under Penkovsky’s purview, it does not raise any red flags (so to speak) when Wynne makes contact through official channels. For his own protection, he knows nothing about the intelligence he carries from the GRU officer to Donovan and her MI6 colleagues. Of course, he develops a pretty good guess when the Cuban Missile Crisis ignites. He might not be a spy, but he’s not an idiot either. As suspicion starts to fall on Penkovsky, Wynne agrees to return again, at the risk of his life and freedom, even though his wife suspects him of having another affair.

Ironbark is the best real-life Cold War thriller since Spielberg’s Bridge of Spies—and it just might be even better. It is a highly compelling portrait of friendship and an absolutely chilling depiction of how the Soviet system oppressed and terrorized its people. We see the insides of KGB prisons as well as their ruthless interrogation techniques, all of which are horrifying to witness.

Most importantly, Ironbark still functions as a tense, intrigue-drenched thriller that takes on grandly tragic dimensions during the third act. This is a painstakingly crafted period production, with every little detail reflecting the early 1960s time period (for appropriately depressing effect). Likewise, the cast uniformly look their parts.

As Wynne, Benedict Cumberbatch runs quite a spectrum, from the shallow but likable twit MI6 recruits to the resolute man of conscience risking everything for Penkovsky. Frankly, it looks like he did a De Niro crash diet to look properly malnourished in later scenes. Yet, the Oscar-worthy standout, knockout performance comes from Merab Ninidze (who also co-starred in Bridge of Spies and the once-censored Stalinist allegory, Repentance) quietly commanding the screen as Penkovsky. It is a smart, deeply humanistic portrait that brings all of the Colonel’s inner conflicts to the fore.

We almost lose patience with Jessie Buckley’s suspicious Sheila Wynne, but she too has some nicely poignant scenes down the stretch. In many ways, this is a very noir kind of film, but Rachel Brosnahan (Miss Maisel) manages to add quite a bit of energy and humor as Donovan, without clashing with the film’s overall tone.

Ironbark is good on its history and tightly executed when it comes to suspense. It’s only January, but this is a clearly a film that deserves to be an awards contender in December, especially for Ninidze. Very highly recommended, Ironbark screens again this morning (1/25) and next Saturday (2/1) in Park City, tonight (1/25) and next Sunday (2/2) in Salt Lake, and Monday (1/27) in Sundance Resort, as part of this year’s Sundance Film Festival.
Posted by J.B. at 3:00 AM