The 1980s were a golden age for cop movies and TV shows. Dirty Harry Callahan, Axel Foley, Crocket & Tubbs, Hunter, and Sledgehammer were on the streets, protecting and serving the public, despite the hand-wringing of politicians and their bureaucratic superiors. Jim Williams joins the force as a fresh-faced idealist, but a nasty domestic violence case shakes his faith in the justice system. Rather awkwardly, it unfolds as part of a vintage 1980s VHS industrial training tape for new police recruits in screenwriter-director Quinn Armstrong’s meta-fourth-wall-breaking Survival Skills, which premiered at the 2020 Cinequest Film & Creativity Festival (still proceeding as planned, at least at the time this was written).

New recruits are supposed to learn along with Williams as the unnamed “Narrator” leads him through his first days on the force. His jaded partner Allison Lohmann is not thrilled to be saddled with such a naïve rookie, but even she dreads a call like the Jenning family’s domestic disturbance. Clearly, Mark Jenning has been beating his wife Leah and daughter Lauren for quite a while, but they dutifully cover for him when Williams and Lohmann arrive on the scene.

However, Williams is not ready to let it go. Despite attempts to narrate him into different scenes, he keeps working the case and reaching out to Jenning’s wife and daughter. It really annoys the Narrator, but it starts to impress the cynical Lohmann. Nevertheless, she still suspects it will all end in tears.

It is incredibly gutsy of Armstrong to use a quirky device in the tradition of larky self-referential films like Rubber, Stranger than Fiction, and Adaptation to address a topic as serious as domestic violence, but he pulls it off. In fact, he manages to depict the challenges to prosecuting domestic abuse in ways that surprisingly resonate and infuriate.

The earnestness of Vayu O’Donnell’s lead performance as Williams is a major reason why the film works as well as it does. He starts out almost impossibly chipper and gung-ho, which makes his steady disillusionment quite distressing to watch. Ericka Kreutz plays Lohmann with cutting sarcasm and grim fatalism. They are definitely not your garden variety good cop-bad cop, that’s for sure. Plus, Stacy Keach is perfectly cast as the blustering narrator. 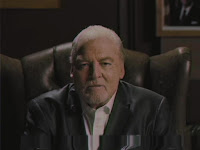 The other key ingredient is the spot-on retro tracking-often-needs-to-be-adjusted look of the film itself. Armstrong and cinematographer Allie Schultz do not merely approximate the quality of semi-distressed video tape. They constantly take inspiration from the format for inventive visual gags.

Frankly, it is sort of amazing this film exists. Even though Armstrong had a prior proof-of-concept short to refer to, it is hard to imagine his Player-style pitch meetings for something so eccentric, but with such a serious message. And somehow it works. Highly recommended for anyone who wants to see something new, Survival Skills screens again Thursday (3/12) and Friday (3/13) during this year’s Cinequest.
Posted by J.B. at 6:00 AM