Cynical critics might label So-dam a “manic pixie dream girl” (its one of their cliched  terms), but she is way too laidback for the manic part. Nevertheless, she seems to have extraordinary powers of communication and strange things just happen around her. Regardless, she is determined to help two middle-aged man-children mature and move on with their lives in screenwriter-director Zhang Lu’s Fukuoka, which opens tomorrow in Korea.

Grouchy Je-moon thinks the twenty-one-year-old So-dam is a nut, because she constantly hangs out in his dark used bookstore and always wants to talk to him. He might have a point about that, even though he is the one hearing voices during the opening scene. Weirdly, she wants to travel with him to Fukuoka on Kyushu Island, but since he has a former friend there, Je-moon agrees to the suggestion.

He and Hae-hyo used to be close, but they had a falling out when they both fell in love with the same woman. Instead of choosing, she dropped out of college and disappeared from both their lives. It is twenty-eight years later, but neither has gotten over it. Initially, Hae-hyo resents their visit, but So-dam is a positive influence on them. They keep arguing like cats and dogs, but that is clearly what they like to do. Meanwhile, So-dam successfully draws out many of the neighborhood locals, conversing in Korean to native Japanese and expat Chinese speakers, with perfect comprehension (it is sort of like the linguistic mash-up in El Hipnotizador, but the characters recognize it happening and think it is odd).

The fantastical elements of Fukuoka are so light and understated, it is unclear whether they really are fantastical. Still, So-dam clearly has powers of universal translation and Hae-hyo believes he recently talked to a dead man, so maybe there is something a little out there going on.

Yet, it doesn’t matter all that much, because Zhang’s film is so wry and intriguing. He really out Hong Sang-soos Hong Sang-soo, while adding delicately subtle supernatural elements. By rejecting conventional scoring, Zhang evokes a vivid sense of place solely through ambient noise. Few filmmakers have a better sense of when to step back and let their films breath organically. 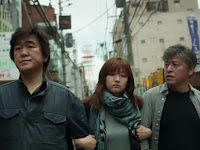 Park So-dam is energetic and charismatic as her free-spirited namesake, but she is also more grounded and perceptive than most Zooey Deschanel clones. (In fact, Fukuoka appears to hold some inexplicable surprises for her character as well.) Yoon Je-moon perfectly expresses the earthy humor and world-weariness of his namesake (this is definitely a thing in the film). Of course, Hong Sang-soo regular Kwon Hae-hyo was born to play neurotics like Hae-hyo. First-time thesp Yuki Yamamoto also holds her own quite nicely as the sweetly mysterious bookstore proprietor, whose late father Hae-hyo thinks he encountered.

Fukuoka is nearly unclassifiable, but it is definitely the assured work of a distinctive film maker. It is witty, wise, and potently bittersweet. Highly recommended for fans of Hong and his protégé, Lee Kwang-kuk, and similarly playful stylists, Fukuoka opens tomorrow (3/12) in South Korea (I’ve been looking for an opportunity to cover it, so now I have).
Posted by J.B. at 3:00 AM