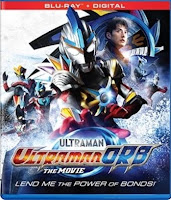 The Ultraman franchise is as Japanese as Godzilla or Gamera, but these guardians of galaxy save the world instead of destroying it. When a kaiju attacks, you better pray there is an Ultraman patrolling our universe. Ultraman Orb is one of the best of Ultra brotherhood. Geed, not so much. As part of their ambitious Ultraman BluRay program, Mill Creek Entertainment has recently released Ultraman Orb: The Movie—Let Me Borrow the Power of Bonds and Ultraman Geed: The Movie—Connect the Wishes.

You have to love the awkward secondary titles. In fact, many viewers will enjoy the nostalgia of revisiting the superhero series they loved as kids. Many might be surprised to know it is still a going concern in Japan, where they continue to launch new series and films focusing on particularly Ultraman heroes. Typically, a relatively self-contained motion picture is released as a capper to each Ultraman sub-series. The payoff is probably richer for fans who followed the series, but the general premise is never hard to understand: superhero fights kaiju.

Ultraman Orb is definitely the better of the two film, in large measure because Orb and his human alter-ego Gai Kurenai (who walks the Earth in leather dusters, like Caine in Kung Fu) inspires more confidence. In Borrow the Power, directed by Kiyotaka Taguchi, he returns to Japan just in time. There are space monsters massing for some sort of attack. Apparently, the nexus of the nefarious business is a creepy mansion that suddenly appeared on the outskirts of town.

Orb will have to investigate single-handedly, since Ultraman X has been confined to a handheld device called the X Devizer. Rather ominously, the Ultra’s old pseudo-nemesis Jugglus Juggler works as the Lurch-like butler in the strange manor that serves as some kind of portal between dimensions and universes. Orb will not be able to defeat the forces of evil on his own, even after borrowing the powers of other Ultramen. Fortunately, an all-time fan-favorite from the early series makes a rousing cameo to save the day. Even if you never watched the franchise before, Taguchi makes his significance and steely presence immediately clear.

In fact, Taguchi generally does a nice job of keeping things lively. Hideo Ishiguro is satisfyingly cool as Orb/Kurenai, while Takaya Aoyagi chews some serious scenery as Juggler. Plus, Miyabi Matsuura is appealingly wide-eyed and shows some decent action chops as Naomi Yumeno, the leader of SSP, a student group dedicated to aiding Ultraman, who are a bit like Nancy Drew and her friends. 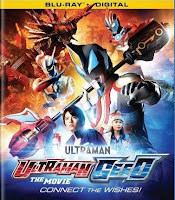 In contrast, Koichi Sakamoto’s Connect the Wishes shows decidedly more inclination to dispense good moral lessons. Geed, the rookie Ultraman (or Riku Asakura, as his human alter ego is known), constantly wrestles with crises of confidence and low self-esteem. In this case, they team up with Airu, an ancient intergalactic princess, who has guarded the legendary Red Steel weapon in Okinawa. Geed will need that magical Macguffin to defeat Gillvalis, an alien AI intent on destroying all intelligent sentient life.

Geed is not merely young and immature. He is also annoyingly whiny. The biggest problem with Geed’s movie is probably Geed himself, but it is also more conspicuous “borrowing” elements from other franchises. Airu’s origin story obviously echoes Princess Leia’s experiences in early New Hope. Likewise, the Gillvalis is not all that different from the Borg. Plus, Geed’s government agent allies look and act very much like Men in Black.

Still, Laiha Toba, his nineteen-year-old human sidekick, is a terrific action heroine (as portrayed by Chihiro Yamamoto), who often upstages Geed. Connect the Wishes also features a very cool kaiju, Gukuru Shisa, the Sacred Lion Beast, who serves as the ancestral guardian of Okinawa. He is also a good guy (and more dependable than Geed).

The Orb movie works better as a stand-alone than the Geed movie, but both films understand what the fans really want to see. They each build to a grand climax that requires multiple Ultraman heroes to team-up and fight together, just like in fans’ best-loved episodes. If you want to sample a quick Ultraman adventure, Borrow the Power is a handy place to start. If you want to do a full binge, Mill Creek has you covered with extensive Ultra-Verse box-sets, including the complete Ultraseven series. With respect to the films released so far, Ultraman Orb the Movie is recommended for the curious and Ultraman Geed the Movie is recommended for the faithful, now that they are available on BluRay and digital, by Mill Creek Entertainment.
Posted by J.B. at 6:00 AM