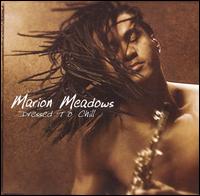 Ordinarily, smooth-jazz saxophonist Marion Meadows is not the kind of artist celebrated here. However, I’ll forgo the snarky jazz snobbery, to give Meadows credit for getting it. The latest Jazz Week (8/14, subscription req’d) reports Meadows will headline the Guantanamo Bay Jazz Festival, organized by the base’s Morale Welfare and Recreation Department. Jazz Week reports comments from Meadows that are a breath of fresh air:

“Being one of the first smooth jazz artists to visit and perform in 2004 at ‘Gitmo’—as the servicemen like to call it—was a career highlight,” said Meadows. “Having been asked back again in 2006 is truly an honor.”

“In these troubled times, when a soldier is called for duty, he or she will probably end up far from home with a tough job to do,” Meadows says. “I’m simply following in the footsteps of all the entertainers who have traveled the globe throughout the years in support of our troops. Opportunities like this make me proud to be an American.”

Although I’m normally turned off by smooth-jazz, I’m now willing to at least give Meadows a try. He was associated Bob James, a smooth jazz figure who has done some interesting work I’ve enjoyed (including arrangements for Mikos Theodorakos’ Serpico soundtrack and themes for Lincoln Center’s production of Tom Stoppard’s Hapgood.)

The bottom line is, if the servicemen enjoy his performances, that is all that matters. After all, they deserve it. There is indeed a secret of Guantanamo. Vile and disgusting acts are being committed on a daily basis. The secret, which the photo-shopping media wants to keep from the public, is that the inmates are the violent aggressors, terrorizing our servicemen. An opportunity to Chill-Out in September will be welcome indeed.
Posted by J.B. at 6:57 AM