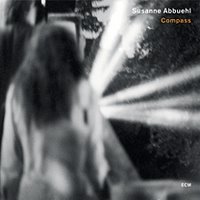 Attempts to integrate jazz with poetry have met with varying degrees of success. Oscar Brown Jr.’s rendition of Gwendolyn Brooks’ “Plain Black Boy” was a career highlight, whereas Herbie Mann accompanying Laurence Harvey reading the forgotten poetry of Walter Benton was not. Susanne Abbuehl’s Compass is closer to Brown—not stylistically, but in that she wisely drew from a variety of source materials which well suit her style. On this CD she mixes the poetry of James Joyce, William Carlos Williams and Feng Meng-Lung, with the musical inspirations of Luciano Berio, Gil Evans, Chick Corea, and Sun Ra (himself an accomplished poet as well as intergalactic traveler). The result is an intriguing vocal album perfect for the genre-bending ECM label.

Indeed, Compass is a disk of contradictions. Abbuehl’s voice is warm and soothing, but also haunting—even ghostly. Sometimes the mood is peaceful, other times brooding. The accompaniment is supportive, yet sparse. On most tracks Christof May’s clarinet wraps around Abbuehl’s voice, almost protectively, except on Sun Ra’s “A Call for Demons,” where he creates an atmosphere of foreboding.

“Sea, Sea!” from James Joyce’s Finnegans Wake would certainly seem a bold choice, perhaps the most unlikely jazz cover since The Bad Plus took on “Smells Like Teen Spirit,” yet it is surprisingly well adapted by Abbuehl. With Wolfert Brederode’s piano effectively punctuating Abbuehl’s interpretation of Joyce’s reputedly inscrutable words, “Sea Sea!” is one of the Compass’s highlights.

Although clocking in under three minutes, Abbuehl’s cover of Chick Corea’s “Children’s Song No. 1” is another standout track, conveying a sense of welcome playfulness in an often pensive set. Featuring original lyrics by the vocalist, it well captures the spirit of her label-mate. Abbuehl also pens a compelling original, the opener “Bathyal,” which starts with the request: “do not run just yet, do not hide” building through a nice solo spot for Brederode, to the plaintive ending: “you may look around before you flee,” showing her own words can be evocative as well.

Compass represents a dialogue between jazz, poetry, and other musical traditions. It is also a dialogue between musicians who take words and music seriously, as Abbuehl, ably supported by May, Brederode, and Lucas Niggli, with his tasteful and unobtrusive brushwork, whisper back and forth to each other. Hers though is unquestionably the lead voice throughout. The result is a rewarding conversation to listen to.
Posted by J.B. at 9:38 AM