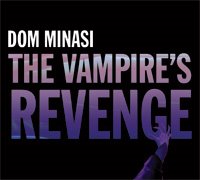 After Elton John’s Lestat bombed spectacularly on Broadway, it would be pretty bold to release a double CD of tunes based on Anne Rice’s vampire characters. Fortunately Minasi’s compositions on The Vampire Revenge are in fact quite bold, succeeding where Broadway failed.

Minasi has assembled an all-star aggregation of adventurous musicians, like Perry Robinson, Borah Bergman, Steve Swell, Matthew Shipp, Joe McPhee, and Sabir Mateen, making Vampire practically a self-contained Vision Festival. Anne Rice readers unaccustomed to freer sounding jazz may well find the moody, turbulent pieces challenging. However, those familiar with the downtown scene will probably find Minasi music refreshingly structured, as there are distinct passages and transitions. This is not a loosely structured succession of free-blown solos. Minasi is taking listeners on a well thought out journey.

Minasi is not afraid to share the spotlight, and uses his soloists to great effect, like Borah Bergman’s solo reflecting the turmoil of the new vampire on the complex “Bloodlust,” another standout track. This is dark, challenging music that rewards repeated listening.

Minasi has taken inspiration from Ellington before on his Takin’ the Duke Out CD. Now he has followed in the Ellingtonian tradition of extended suites inspired by literature, like Suite Thursday and Such Sweet Thunder. His Anne Rice inspired compositions succeed admirably where Broadway should have feared to tread.
Posted by J.B. at 8:56 AM