Memo to Q: This is how Chinese Communists Feel About Jazz 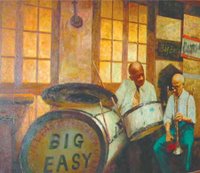 Douglas and Mary Monitto built a world-class jazz venue in a replica Louisiana mansion on the outskirts of Beijing. Unless fate has intervened, the local authorities took the wrecking ball to it on Sunday. According to the China Daily on 8/5:

“Monitto’s widow, Mary, said they spent more than US$1 million to fly everything from a New Orleans jazz club, The Big Easy, into China, after being encouraged to open the music outpost by local authorities and signing a 13-year contract in 1998.

Mary Monitto said she received a notice from Chaoyang Park [the local authorities] in January ordering her to vacate the mansion within two weeks, even though the contract runs until 2011.

After fruitless effortsto meet with Chaoyang Park officials, Monitto received a new order on Tuesday stating the building would be demolished this weekend. Water and electricity were cut off on Wednesday as workers erected a four-metre-high wall around the club, bulldozers at the ready.”

According to a local official a “Peace Plaza,” will be erected in place of The Big Easy, but the details of just what that would entail were vague. In truth, Ms. Monitto should be congratulated for hanging on as long as she did. There has not been any follow-up at China Daily, so presumably, that was that.

It does raise a few questions. Not to be obnoxious, but has anyone asked Quincy Jones, who was so charmed by the Chinese government during a tour in May, how he feels about an important beachhead for jazz being demolished by the local authorities? At the time Jones gushed (the quote is from Reuters, so it must be true): “The inspiration of the strong leadership in preparing the 2008 Olympic Games and the theme ‘One world, One Dream’ has led me to offer everything I can possibly bring . . . to this fantastic event.” Strong leadership indeed. I'm sure Q would feel bad about Ms. Monitto's misfortune, but he seems to need a reality check regarding the nature of the Chinese government.

There is also a good lesson here for so-called capitalists who have been similarly charmed by Beijing. Think the Chinese government will respect your contract rights? The Monittos thought so.

(Image from China Daily of a Big Easy fresco which most likely no longer exists.)
Posted by J.B. at 6:21 AM