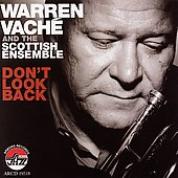 One of the best jazz films of the 1980’s is Frank Gilroy’s The Gig, the story of a kicks band that lands a real paying gig in the Catskills one Summer. A major reason for its success was the music and acting chops of Warren Vaché. While both Vaché and The Gig, (currently unavailable on DVD) deserve to be more widely celebrated, Vaché has at least recorded often. With his new recording Don’t Look Back, Vaché tackles the “with strings” concept, with the help of deft musicians and arrangers, who do not confuse the saccharine for sumptuousness.

Many might associate the cornet with brash Dixieland playing, but here Vaché shows its full romantic potential, gently caressing the melodies, but never succumbing to the lush string accompaniment. While the over-riding mood is one of wistful romanticism, “Molly on the Shore,” the Irish folk ballad appearing nearly halfway through the program, is a bit more up-tempo with an almost Baroque quality, providing a nice respite from the gorgeous melancholy. Indeed, “Molly” is a standout track, as is Chirillo’s original “Valse Prismatique,” with its more exotic feel, adding some spice to the proceedings.

Don’t Look Back is also newsworthy for premiering an original Johnny Carisi arrangement of “Spring” originally penned for a Charlie Parker strings session, but unrecorded until now. Vaché shows no sign of being intimidated by stepping into Bird’s role. His playing is as assured here as it is throughout the session. Vaché’s solos are unerringly tasteful throughout, but his vocal on the concluding title track, a speak-on-key performance a la Rex Harrison, may not work for every listener, but it shouldn’t ultimately detract from an overall beautiful CD.

Not surprisingly, Vaché is the primary solo voice on Don’t Look Back. However, James Chirillo does take a nice turn on “I Fall in Love Too Easily,” thanks to the generous arrangement of the leader cornetist. Chirillo, who often plays with the Lincoln Center Jazz Orchestra when the services of a guitarist are needed, ought to be better known himself, but hopefully his performance here as string arranger and conductor will lead to further opportunities for him.

“With Strings” sessions have a bad reputation with many jazz listeners for their easy sentimentality. Thanks to Vaché’s playing and the high caliber of the Scottish Ensemble’s string accompaniment, Don’t Look Back avoids clichés and cloyingness, fully realizing the romantic potential of instrumental jazz combined with a supportive string section.
Posted by J.B. at 6:38 AM