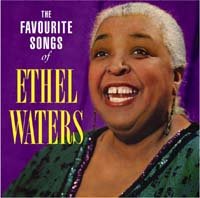 Ethel Waters was one of the first popular recording artists to successfully crossover into a straight acting career. She was nominated for a Best Supporting Actress Oscar for Pinky (1949), at a time when the Academy still was not particularly generous in its recognition of African American artists. Waters was also one of the most popular vocalists of her time, a bridge between Bessie Smith and Billie Holiday, yet both her recordings and films are relatively hard to find, a lamentable condition which Sepia sought to remedy with a fine new collection The Favourite Songs of Ethel Waters.

One of the few Waters films available on DVD is the Vincente Minnelli musical Cabin in the Sky (1943), a highlight of her career, four tracks from which are included on this set. It was here that Waters launched the standard “Taking a Chance on Love,” in a rousing and definitive performance. The film version of Cabin also introduced “Happiness Is a Thing Called Joe,” which she revisited in 1947 in a dramatic interpretation, with the spare accompaniment of Reginald Beane’s piano.

Also included are tracks with the J.C. Heard Orchestra on swinging jazz-oriented tracks, sometimes featuring sassy, even suggested lyrics that Waters would later repudiate when she embraced her gospel calling. In “Honey in a Hurry” she sings: “That man is built for speed, but there’s something else that I certainly need.” Hmm, what does that reference? Little-known violinist Ray Perry’s playing is also an ear-openening discovery. Waters had great range, well reflected in this collection, whether swinging with a big band, in moody after-hours sessions with Beane, or caressing a song against the vocal backdrop of the Bob Davis Singers.

Perhaps Waters is not as readily available as she should be because some have difficulty relating to the final arc of her career. She would be closely associated with Billy Graham in her later years, performing gospel music exclusively. However, as Sepia’s collection shows with “The Crucifixion” (1947) and “Partners with God” (1955), Waters’ religious conviction was evident during the earlier years of her career, as well.

More of Waters’ films like Cairo (1942), Tales of Manhattan, The Member of the Wedding (1952), and The Sound and the Fury (1959) ought to be on DVD. She also co-starred in Manhattan Tower (1956), a television film based on Gordon Jenkins’ sound poem of the same name, which would be interesting to see, if the film still exists. Happily, Sepia’s new Ethel Waters collection is an excellent survey of her vocal artistry. Based in the UK, Sepia is doing laudable work preserving and reissuing classic vocal recordings by the likes of Waters, Billy Daniels, Jo Stafford, and Monica Lewis. (Check out their website and pick up something good.) Ethel Waters herself was a huge influence on many vocalists who followed her, including Billie Holiday, so it is fortunate this collection will help keep her recorded legacy available for new listeners to discover.
Posted by J.B. at 7:12 AM