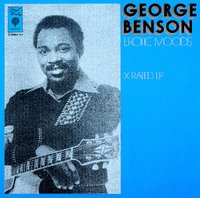 Drudge and other media outlets have had a field day with the story of a small Fresno-area radio station, KFYE 106.3 on your FM dial, changing formats, from Christian programming to sexually-themed songs. Tunes like Marvin Gaye’s “Sexual Healing” and the Beatles’ “Why Don’t We Do It In the Road” will be in heavy rotation, along with less explicit tunes mixed with the recorded sounds of sexual ecstasy.

This brings to mind a George Benson album released on the Paul Winley label titled Erotic Moods, which the guitarist actually claims to have never played on. While the Winley LPs have a reputation for being a bit dodgy, if not outright bootlegs, this record (now available as a vinyl reissue) features some nice funky soul jazz. However, “Sweet Taste of Love,” an otherwise appealing slow groove, is marred by a similar overdubbing of moans and groans. Listeners might find it maybe, somewhat, kind of amusing on the first hearing. However, it is impossible to spin to a second time. There is simply no way for such "remixes" to not sound cheesy. As a format, such overdubbing would be impossible to live with. How long could anyone stay tuned in while sealed in their car during the morning drive-time rush, for instance?

People of good conscience can legitimately object on moral grounds, citing violations of FCC standards. Others suspect it is simply a publicity stunt, prior to a more serious and permanent format change. Yet one might foresee further legal complications, if the original artists were to object to their songs getting the X-rated treatment.

Regardless, KFYE is engaged in a dumb stunt. It is good news for Al Franken though. Air America is no longer the hardest radio outlet to spend extended time with. It might temporarily lead to some more radio play for George Benson (or whoever played on the Winley record released under his name) as well. His legit Body Talk album has potential too.
Posted by J.B. at 6:40 AM