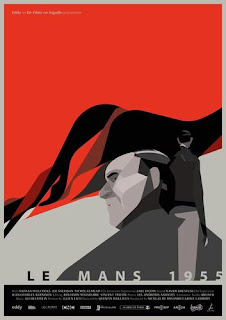 John Fitch saw plenty of checkered flags in his career, but his real legacy is the development of “Fitch barriers,” a low-cost, easy to implement method of minimizing the impact of roadside accidents. The 1955 24 Hours of Le Mans is the reason why. Terrible wrecks were a constant peril of the famous French endurance race, but the crash that killed his racing partner and eighty-four spectators remains the worst in motorsport history. Fitch and the Mercedes team director respond to the shock and horror in Quentin Baillieux’s animated short film, Le Mans 1955, which screens this weekend as part of Anima Syros 2019.

Fitch and his partner Pierre Levegh are explicitly instructed to serve as the wingmen of Mercedes’ A-team, Juan Manuel Fangio and Stirling Moss, to help them win. That does not sit well with the competitive Fitch, but the plan appeared to go up in smoke when Fangio stalled at the starting line, while Levegh got off quickly. Fitch’s partner was running strong until his fatal accident. As a result, the team director Alfred Neubauer faces some hard decisions, but the right thing to do seems obvious to Fitch.

The sleek animation of Le Mans 1955 might be familiar to anyone who has seen Baillieux’s groovy video for Charles X’s Can You Do It?, which was included in last year’s Animation Show of Shows. Clearly, he has an affinity for racing sports, because that early work features a fanciful horse race through the streets of Los Angeles. Tragically, viewers and the drivers will not be able to enjoy the full-throttle power of the 1955 Le Mans. Instead, his film focuses on the dynamics of a team, during its darkest hour.

Yet, Le Mans 1955 is still wildly stylish. You can imagine something like film noir and Speed Racer pureed in a blender, but with distinctly French seasonings mixed in. It is definitely a cool look, which makes Baillieux an animator to watch. Highly recommended for fans of animation and motor sports, Le Mans 1955 screens today (9/21) and tomorrow (9/22), during this year’s Anima Syros.
Posted by J.B. at 6:00 AM