Dolph Lundgren is the Tracker 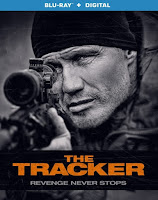 There is a long tradition of established action stars of a certain age scoring a quick pay check in Italy making violent cop thrillers known as “poliziotteschi.” The heyday of these films was lovingly documented in Eurocrime! and Tarantino satirized them in Once Upon a Time in Hollywood, but they are still produced now and then. It therefore rather makes sense for the great Dolph Lundgren to star as a “Northern European” who returns to an isolated Southern Italian city for some al Dante payback in Giorgio Serafini’s The Tracker, which releases today on DVD.

Fifteen years ago, Aiden Hakansson’s wife and daughter were murdered, when their abductors botched the ransom exchange. During the intervening years, Lupo the kingpin built a drug-smuggling empire on the foundation of more successful kidnappings. When an honest private detective contacts the still grieving father out of the blue with the promise of information, Hakansson returns to the fateful village. However, by the time he arrives, the investigator is already dead—supposedly as a result of suicide, but the crime scene paints a different picture.

As is usual in these kind of movies, the corrupt cops immediately pressure Hakansson to leave. They are not too welcoming either to Antonio Graziani, a national copper assigned to the region. It only takes him a few hours of perusing cold case files to realize the entire station is in Lupo’s pocket. Meanwhile, Hakansson starts utilizing his finely-honed hunting and tracking skills.

Granted, Hakansson’s opening narration explaining the difference between a hunter and a tracker is a bit pretentious for a grubby revenge thriller, but the ambition is still appreciated. Serafini and cinematographer Angelo Stramaglia also execute with a fair degree of flair, mining the picturesque Taranto locales for all they are worth.

Refreshingly, Hakansson is a far cry from an invincible superman. In fact, Lundgren plays him with a good deal of world-weary soul. Of course, he is still the biggest guy on the screen. The truth is Lundgren has kept in far better shape than many of his action-80’s colleagues, especially those who pal around with Russian despots (clearly, vodka and caviar are nefariously fattening). Regardless, we can definitely still buy into his action chops, especially alongside his soft-looking co-stars.

Unfortunately, the villains and crooked coppers are a uniformly generic lot. However, Marco Mazzoli shows some surprising signs of life as Graziani and Bruce McGuire adds some seasoning as Ray Martin, the British expat who helps clue-in Hakansson.

Admittedly, The Tracker is highly formulaic, but if you are in the mood for some standard issue Lundgren beatdowns, this is one of the somewhat better options. Sort of recommended for fans of Lundgren, the action movie star and anti-human trafficking activist, The Tracker is now available on DVD.
Posted by J.B. at 6:00 AM