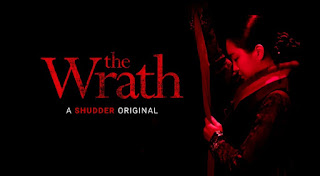 Context is everything, isn’t it? Having a swastika-shaped burn-scar is a little creepy in Fourteenth Century Korea, but the symbolic implications are radically different from what they would be in today’s world. In fact, it has a talismanic effect for young common-born Ok-bun. She will need it when she faces dangers from her new family and a wickedly angry ghost in Yoo Young-sun’s The Wrath, which premieres today, exclusively on Shudder.

Lady Shin’s family has been so badly cursed, it might not be around much longer. The ghost has already murdered two of her stepsons, leaving only the entitled Lee Myung-gyu to carry on the family line. The idea was to use poor Ok-bun in a decoy scheme with the ghost and then dispose of her. However, Myung-gyu had other ideas that do not work out so well. Yet, Ok-bun still does good service for the family by getting pregnant immediately.

Obviously, this leads to considerable jealousy amongst the barren first two wives. Nevertheless, Lady Shin cannot afford to cavalierly throwaway a male heir. Ok-bun is also fiercely protective of her unborn baby. As the ghost’s bloodshed escalates, a conscientious exorcist is called in, who will do his best to aid Ok-bun, but she will be mostly on her own.

A fair amount of blood gets splattered in The Wrath and there are a handful of legit torture scenes, but it is more about mood, atmospheric settings, and foreboding. It is sort of like a vintage Hammer Horror film set during the early Joseon Era. As such, it is a good deal of fun, despite all the distressing positions Ok-bun finds herself in. Technically, The Wrath is a remake of Lee Hyeok-su’s 1986 K-horror movie, Cry of a Woman, but for those who have not seen the original, it definitely feels like its own malevolently melodramatic thing.

Indeed, malevolent melodrama is what Seo Young-hee is all about, gleefully chewing the scenery as Lady Shin. She is enormously entertaining to watch being dastardly. Park Min-ji similarly goes for broke as the deranged ghost. Son Na-eun is their polar opposite as the innocent and vulnerable naïf, Ok-bun, but she takes the character on a credible journey—not exactly to empowerment but to a more forceful personality. Although Lee Tae-ri is problematically milquetoast as the exorcist, Kim Tae-han adds some rugged soulful integrity as a Buddhist monk, who is essentially fired from his role as the family’s spiritual advisor (for being too spiritual).

The Wrath even borrows from Jane Eyre, but when it does, it gives it a 180-degree spin. Yoo throws dozens of gothic and K-horror conventions into the cauldron to simmer, but since he clearly respects the genres, they all work together rather well. Affectionately recommended for fans of lurid historical horror, The Wrath is now streaming exclusively on Shudder.
Posted by J.B. at 9:00 AM