The previous film in Fritz Lang’s so-called “Indian Epic” ends with both a cliffhanger and a spoiler. We are told flat out that the two star-crossed lovers will indeed be saved, even though their chances of survival were looking pretty paltry. Yet, it will turn out to be a case of out of the frying pan and into the fire for Seetha the temple dancer and Harald Berger, the German architect, in Lang’s The Indian Tomb, the second part of his Indian Epic, which opens today at Film Forum, in conjunction with, but separately from part 1, The Tiger of Eschnapur.

Previously on Fritz Lang’s Indian Epic, Seetha and Berger tried to escape the Maharaja’s clutches, but didn’t flee far enough. Soon Seetha will be forced back into the Maharaja’s gilded cage, while Berger will be secretly held captive by the lovelorn despot’s envious brother, Prince Ramigani, for his own scheming purposes. Unbeknownst to Chandra, there is a pitched power struggle going on behind the scenes and nearly all the players have lined up behind Ramigani, with only the influential General Dagh remaining loyal to the Maharaja.

There was a lot of scene-setting and expositional set-up in Tiger, so it is quite impressive how Lang, the old master, manages to keep it felling snappy. In contrast, Indian Tomb revels in all the resulting intrigue. We are talking about secret passages and shadowy cabals here. Yet, the lush scenery and Debra Paget’s sexually charged dance numbers remain the greatest attractions. In fact, Indian Tomb boasts the infamous/celebrated “snake dance.” 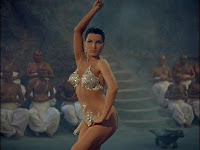 Ironically, Paget would eventually come out of retirement to host an evangelical talk show on the religious network TBN in the early 1990s. Obviously, she is a lot more fun to watch here. She continues to balance seductiveness and spirituality quite adroitly as Seetha. Arguably, Paul Hubschmid gets a bit more physical and bit more human as Berger this time around. Walther Reyer continues to throw wildly over-the-top tantrums as the Maharaja, while Jochen Blume adds some dignity as Asagara, the palace engineer and a wholly positive Indian character.

Lang steadily cranks up the lurid scandal as Indian Tomb purrs along. Yet, he gives it all a sense of classically tragic sweep. Again, it is not a transcendent cinematic masterpiece, but it is big, bold, and compulsively watchable. Enthusiastically recommended for fans of lusty historicals, The Indian Tomb and The Tiger of Eschnapur both open today (9/27) in New York, at Film Forum (each ticketed separately).
Posted by J.B. at 6:44 AM