It was Fritz Lang’s triumphant return to German cinema, but much of the filming happened in India. In a way, that was fitting, since German expat filmmaker helped jump-start the India film industry with silent films such as A Throw of Dice and Shiraz. In this case, Lang was also returning to the source novel written by his infamous/celebrated wife, Thea von Harbou that he developed for the screen in 1921, before the studio handed the project over to another director. He would need two films to complete his unfinished business, neither of which has been released theatrically in America in their original uncut form, until now. Separate admissions will be required when Lang’s restored The Tiger of Eschnapur and The Indian Tomb open today in New York.

Fortunately, everyone in India speaks perfect German, so Harald Berger has no trouble getting around. The architect has come to Eschnapur at the behest of Maharaja Chandra to build schools and hospitals. On his way to the palace, Berger saves Seetha, a bi-racial temple dancer from a hungry tiger. The Maharaja had also summoned Seetha to perform ritual dances that are just slightly risqué than what you might find in Showgirls. (These bits were largely carved out when both films were cobbled together for its prior problematic American release as Journey to the Lost City).

Of course, Berger and Seetha fall in love with each other and just as naturally, the Maharaja falls hard for her and seethes with jealousy when he discovers their secret romance. The resulting intrigue does not bode well for the construction of Eschnapur’s surely needed schools and hospitals.

The entire cast is German, except for American Debra Paget, so there is no getting around the problematic “brown-face” makeup. However, the scenery looks authentic, because much of the film was shot in India, including the stunningly cinematic City Palace, Udaipur, where select scenes for Octopussy were also later filmed. Paget’s wardrobe and choreography for Seetha is also what you might describe as “eye-catching.” 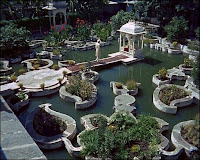 Paget smolders yet still manages to project a spiritual sensibility as Seetha. Paul Hubschmid is appropriately square-jawed as Berger, but also rather humorless, in a Teutonic sort of way. Walther Reyer plays the Maharaja as such an injured-ego neurotic, he makes him a weirdly sympathetic villain. Sabine Bethmann presents a more modern portrayal of a woman as the intuitive and proactive Irene Rhode, Berger’s sister and the wife of his business partner, Walter Rhode.

Tiger is an entertainingly juicy film, in an old-fashioned throwback kind of way. It simply cannot compare with Lang’s classics, such as Metropolis and M, but it looks great and serves up plenty of colorful spectacle. Recommended for cineastes who are smart enough to consider the film in its proper context, The Tiger of Eschnapur and The Indian Tomb open today (9/27) in New York, at Film Forum.
Posted by J.B. at 9:45 AM