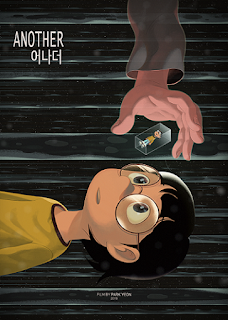 At least this nebbish Korean teen doesn’t have to worry about social media yet. He only has to contend with a ghostly doppelganger, as well as all the other pressures of academics and extra-curriculars. Coming of age is no easy business in screenwriter-director Park Yeon’s animated short, Another, which screens during Indie-AniFest 2019, the Korean Independent Animation Film Festival.

“Live Kid” is busier than most over-worked salarymen. By the time he returns home on the bus, he hardly has a chance to speak to his parents at all. As a result, when a strange entity starts haunting him, he must face it on his own. It is not just his imagination. The ghost is real and it has a secret to tell: they were once fraternal twins, but only “Live Kid” survived the pregnancy.

Another is a wonderfully stylish film that will delight horror fans. It starts out as a genuinely spooky ghost story, but takes a major twist during its all too brief eight-minute running time. It is sort of like contemporary K-horror, mixed with R.L. Stine and O. Henry. Plus, it also serves up some sly social commentary down the stretch.

There is something refreshingly enjoyable about a gore-free, lightning-crashing, creeping-shadows ghost yarn, which Park totally nails. Based on Another, we would love to see him do a full anthology film, somewhat in the spirit of Scary Stories to Tell in the Dark, but naturally animated. Very highly recommended, Another screens Saturday (9/21) and Monday (9/23), as part of the First Flight 1 program, at this year’s Indie-AniFest.
Posted by J.B. at 6:00 AM