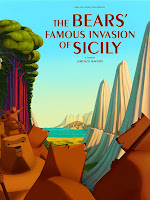 For decades, Sicily was a stronghold for Italian monarchist politics. It must have been because of the bears. According to Dino Buzzati’s 1945 children’s book, the bruin-kind were once in charge here. In fact, the bear king was rather popular, until his administration fell victim to the sort of jealousies and shortsightedness that are typically the specialty of mortal men. Lorenzo Mattotti adapted Buzzati’s epic fable, The Bears’ Famous Invasion of Sicily as a French-Italian animated co-production, which screens as the opening night feature of the Alliance Française’s 2020 Animation First Festival, in New York.

This will be a tale told by Gedeone the troubadour, wisely selected to appeal to the bear, whose lair he entered uninvited. Leonce was a wise bear king, but he slides into a funk of depression when his beloved son Tonio is abducted by hunters. His brooding inaction even jeopardizes the survival of the bearsfolk, since winter is fast approaching. Fortunately, a sage elder bear convinces him to invade the Grand Duchy of Sicily, in the hope of finding both food and Tonio. It will be a pitched battle, with momentum swinging from the bears to the tyrannical Grand Duke and back again. The wildcard will be the court sorcerer De Ambrosiis, who was never fully appreciated by his corrupt boss.

Eventually, the bears defeat the Duke, largely because the humans are well ready to be rid of him—De Ambrossiis first and foremost. However, Gedeone’s attentive audience has the second part of the story. Alas, Leonce won the war, but it turns out he lost the peace, largely because when the bears accepted the mantel of human power, they started exhibiting human corruption, arrogance, and ambition. Turns out Lord Acton’s dictum and Public Choice Economic Theory apply just as much to bears in power as they do to men.

Famous Invasion feels like an accessible children’s story in the moment, but its thematic depth resonates long after viewing. There is definitely a lot of wisdom in its depiction of human nature and bear nature. Similarly, the animation is deceptively simple, in an elegant way the evokes the vibe of classic European illustration. Presumably, it is largely inspired from popular editions of Buzzati’s source novel. Visually, it is a striking film, most notably in the picturesque backdrops and the strong use of deep, warm colors. The character designs also have a great deal of charm, particularly the bears—as you would certainly hope. Paul Grimault’s The King and the Mockingbird leans more towards the humorous, but it is still not a bad comparison in terms of style.

You can’t beat a film filled with talking bears, especially one that is this intelligent and sophisticated. Maybe its time to give the bears another shot running things. Regardless, this is a film that really will entertain viewers of just about every age group. Very highly recommended, The Bears’ Famous Invasion of Sicily screens this Friday (2/7), the opening night of Animation First.
Posted by J.B. at 7:00 AM