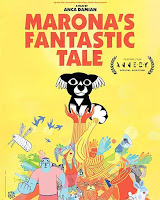 Your dogs better understand life than you do, so just scratch them behind the ears and toss them a ball. That is definitely the message of recent films like A Dog’s Purpose and Art of Racing in the Rain and this animated feature definitely concurs. According to the puppy who comes into the world as “Nine,” it is a dog’s life when you are dog, but hers will be even doggier. Yet, there will be grace notes too in Anca Damian’s Marona’s Fantastic Tale, which screens today as part of this year’s Animation First.

As is often the case for strays, “Nine” was the product of an unplanned pregnancy. Her mother is warm and sheltering, but she will not remain in her care long. Instead, she is given to the owners of the pure bread who was tomcatting with her mother, but they abandon her shortly thereafter. She will subsequently live with three owners, who call her Ana, Sara, and finally Marona (or Miruna, in the case of the family’s grouchy grandpa).

It is a sad tale, but Marona still loves the owners who showed her love in return. Burly Itzvan, the well-meaning construction worker is probably the best of the lot, but his shallow wife is another story. Isn’t that always the way for a dog? It certainly is for Nine/Sara/Marona.

Marona’s Tale is definitely a dog story for adults. There is absolutely no mature subject matter, but the new agey fable-like story will be too sad and Damian’s style of animation will be too abstract for younger children. In fact, most viewers will need a little time to acclimate to the wavy collage-like swirl Damian’s visuals, rendered in collaboration with artist Brecht Evens. Utilizing 2D, 3D, and old school Reiniger-esque cut-out, Damian creates an immersive and disorienting world, convincingly approximating a dog’s eye view on life.

Of course, it is all necessarily a bit of a downer, since the story unfolds in media res, after Marona/Nine is hit by a car, prompting her life to flashback before her eyes. You really have to look for those grace notes, but that is the whole point of Anghel Damian’s screenplay. Somehow, the film makes its point without belaboring it. Of course, the charm of the titular dog helps a lot.

Damian’s striking animation also definitely helps bring the audience into the picture. Her previous work includes heavy animated documentaries like The Magic Mountain, which chronicled the life of anti-Communist Polish dissident and mountaineer Adam Jacek Winker. Yet, at times, Marona’s Fantastic Tale is even heavier than that was.

Regardless, Damian’s animation is unusually “animated,” often tipping its hat to great European artists. Pablo Pico’s lively score also helps buck-up the audience when the going gets tough for the cute little pooch. It is wonderfully elegant film, with a fatalistically French outlook on life. Highly recommended for animation fans (who will really appreciate what Damian and company do with this deceptively simple story), Marona’s Fantastic Tale screens this afternoon (2/9), as part of Animation First, in New York.
Posted by J.B. at 5:30 AM