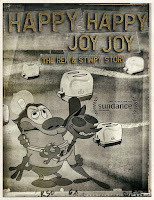 Roman Polanski is human garbage, but somehow that doesn’t spoil Chinatown or Rosemary’s Baby for most viewers. Animated franchises are somewhat different. We feel a more personal connection to the characters and therefore often project a kindly Geppetto image on their creators. That is why it is so disappointing when animation stars disgrace themselves. Sadly, John Kricfalusi, the man behind Ren & Stimpy, is a case in point. Ron Cicero & Kimo Easterwood chronicle the up-and-down history of the beloved show and its problematic creator in Happy Happy Joy Joy: The Ren & Stimpy Story, which premiered at the 2020 Sundance Film Festival.

Technically, The Simpsons predated Ren & Stimpy, but it was still one of the original prime time weekly cartoons that developed a popular following for its rude style of humor. It was a breakout hit for Nickelodeon, but success went to Kricfalusi’s head. Eventually, he made diva-like demands of the network, including complete creative control, even though they owned the property. Not surprisingly, Nickelodeon was forced to fire Kricfalusi, who subsequently gave his darker impulses free rein while mismanaging his own studio.

Frankly, the clear “hero” of HHJJ and by far the most sympathetic figure we hear from is former Nickelodeon executive Vanessa Coffey. She is the one who zeroed-in on the Ren and Stimpy characters during Kricfalusi’s very different initial pitch and asked him to develop a show around them. She was also the person who curbed his excesses, at least for a while. Throughout her interview segments, Coffey has nothing but affection for the characters and her comments on Kricfalusi are far more diplomatic and reflective than he has a right to expect.

A good chunk of the film is devoted up-front to a deep dive into the show’s world and its assorted characters. It might even be too deep for non-fans or even casual admirers. However, things start to get interesting about halfway through when Cicero & Easterwood provide a detailed blow-by-blow of Kricfalusi’s network conflict. Then they become uncomfortable.

Cicero & Easterwood never sugarcoat Kricfalusi’s inappropriate and abusive relationships. They also hold his feet to the fire for on-camera comments. He complies, but it is incredibly awkward to watch. This documentary has a lot of integrity, so you have to give the filmmakers credit, but it really makes you sad to see these beloved characters effectively rendered orphans, because their creator is such a radioactive creep.

Usually, pop culture documentaries instill a warm glow of nostalgia, but that is not the case here, for obvious reasons. Honestly, it is rather a downer, but viewers can take some satisfaction from seeing history vindicate Coffey. Consequently, it is hard to say who the right audience for this film would be, even though it is brutally honest and quite compelling. Recommended for those interested in some unvarnished history of early 1990s television, Happy Happy Joy Joy is sure to garner further attention following its screenings at this year’s Sundance.
Posted by J.B. at 6:00 AM