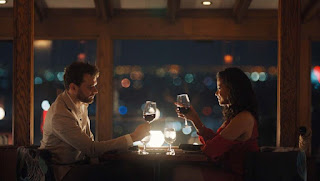 You can’t hardly call horror films “date movies” anymore, because its like they’re trying to keep people apart. The horrors of blind dates are already pretty well established, but you’d think you could trust a fix-up from your boss, right? Sadly, Cherie will learn otherwise in Shana Feste’s Run Sweetheart Run, Blumhouse’s latest women vs. men horror production, which premiered at the 2020 Sundance Film Festival.

Cherie’s last boyfriend was such a violent thug, she has been a bit skittish to start dating again, so her boss fixes her up with a wealthy client, who owns a picturesque mission-style mansion in the middle of downtown LA. Of course, the well-heeled Ethan is profoundly bad news. The date is great, but the coffee-after at his place turns nightmarish. Suddenly, is on the run from her date-turned hunter, who confidently promises their “game” will end at sunrise, one way or another.

The cops won’t help (they’ve either been bought off or just don’t care) and the hookers and street people are too scared to get involved. The only helpful advice Cherie gets is to seek out the mysterious Blue Ivy. She is so desperate, Cherie even seeks refuge with her ex’s gun-wielding friends, but they are no match for Ethan. He has superhuman strength and can literally smell her blood. To make matters worse, it is a certain time of the month for Cherie, as the film establishes with a number of uncomfortable scenes. Ethan’s only weakness seems to be a fear of dogs.

Unlike Blumhouse’s Black Christmas remake, the gender politics of RSR do not drown out the blood or the fun of its fundamental horror business. However, there is a rather glaring credibility issue. It makes no sense for Cherie’s boss to pimp new victims for Ethan so close to home. Regardless, Feste builds the tension and exploits the generally creepiness of LA night life quite effectively. She also riffs on ancient monster legends in hip and clever ways.

Ella Balinska and Pilou Asbaek are both solid as Cherie and Ethan. We wait a surprisingly long time for her to start acting empowered, but her freak-outs and panic are totally convincing, whereas he clearly relishes chewing the scenery and talking villainous trash. The great Shohreh Aghdashloo adds a whole new layer of intrigue as Blue Ivy. Yet, maybe the best performance comes from stray dog, who is more of a life-saver than Lassie ever was (yes, he’s a very good dog).

Weirdly, Blumhouse seems determined to sow distrust and discord among men and women, when date nights must be the core of their business. Regardless, RSR survives and overcomes its ideological baggage. It’s a tense, wild ride, with a crowd-pleasing dog, so what more could you ask for? Highly recommended for horror fans, Run Sweetheart Run screens again tonight (2/1) in Park City as part of this year’s Sundance.
Posted by J.B. at 8:00 AM