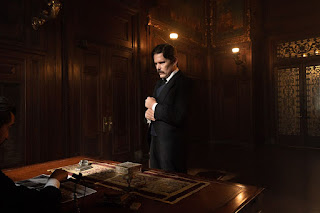 Nikola Tesla is probably the only inventor to have a heavy metal band and an electric car named after him. His great rival Thomas Edison can’t say that. Fittingly, he now also has the idiosyncratic distinction of being the subject of a Michael Almereyda film. It is concretely based on Tesla’s life, but there is nothing conventional about the way it unfolds on screen in Almereyda’s Tesla, which won the Alfred P. Sloan Prize for use of science in cinema at the 2020 Sundance Film Festival.

Yes, Almereyda covers all the major beats in Tesla’s life, including his early years in Croatia, his brief tenure at Edison’s workshop, his success developing alternating current, his difficult relationships with the Morgan family, and his iconic (or infamous) experiments in Colorado Springs and at Wardenclyffe Tower. However, this is about as far from straight biography as you can get. Instead, Almereyda starts with the approach of his fascinating Stanly Milgram film, Experimenter, cutting loose all narrative restraints and doubling down on surreal stylization.

This time around, he frequently utilizes similar rear-screen projections for disorienting effect, but he also employs the torch-carrying Anne Morgan as a wholly unreliable, fourth wall-puncturing narrator. The film freely skips around the Tesla timeline and often wistfully depicts long hoped-for incidents that never happened in life, much like the fantasy scenes in Annie Hall. The resulting spectacle resembles Milos Forman’s Ragtime if rewritten by Charlie Kaufman, but with a weird mix of mischievousness and wistfulness that is all Almereyda.

If you have seen Experimenter it will help prepare you for the sort of hyper-real effect Almereyda achieves throughout Tesla, even though the earlier profile-in-science was considerably more grounded. This is the sort of film you have to roll with, but if you can maintain your sea-legs and your bearings to any extent, Almereyda’s woozy kaleidoscope is absolutely dazzling to behold. Admittedly, Tesla’s third act crooning of Tears for Fears’ “Everybody Wants to Rule the World” is wacky bridge too far, but hey, who’s to tell Almereyda he should start holding back at that point?

Two of the major reasons Tesla works so well are Ethan Hawke and Kyle MacLachlan, who are perfectly cast as Tesla and Edison, in ways that best contrast their differences. Hawke’s Tesla is the king of all brooders, who has contempt for the success he chases. He is an introverted man, uncomfortable in his own skin, somewhat akin to the shy teen Hawke played in Dead Poets Society. In contrast, Edison is a brash American striver. Yet, MacLachlan conveys all his insecurities and fears of failure. He is a rival to Tesla, but not a villain.

This is definitely a director’s film rather than a thesp’s showcase, so it is pretty impressive that they stand out, in a positive way, to the extent that they do. Rebecca Dayan is also sultry and magnetic in her trippy appearances as Sarah Bernhardt (when Tesla is at its most Ragtime-esque). However, Ebon Moss-Bachrach brief but poignant work as Tesla’s aspiring inventor friend Szigeti might just encapsulate the entire spirit of the film.

Probably half the audience left our Sundance screening dizzy and baffled—and the reception for Tesla will only get more divisive as it screens more widely. This is a masterwork from a consistently daring filmmaker, but he consistently spurs all the tried and true clichés of biographical narratives. Yet, anyone who is curious to see the boundaries of filmmaking get stretched really should make a point of seeing what Almereyda and indie-cinematographer-extraordinaire Sean Price Williams manage to realize on-screen. It is sometimes eccentric, occasionally over-the-top, but always amazing. Very highly recommended for adventurous viewers, Tesla screens again today (2/2) as part of this year’s Sundance.
Posted by J.B. at 8:00 AM