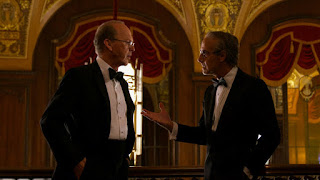 Finally, someone aspired to create the Great American actuarial movie. Sadly, it was made possible by one of the worst human tragedies in American history—the horrific terrorist attacks of 9-11. In the short-term, most victims just wanted the terrorists and their enablers to pay, but trial lawyer Ken Feinberg knew some cash payouts would provide tangible help over the long-run. His stewardship of the September 11th Victims Compensation Fund is the focus of Sara Colangelo’s Worth, which screens today during the 2020 Sundance Film Festival.

Feinberg is the sort of colorfully cynical attorney who can lecture his law students on the art of putting a dollar figure to a human life and leave them impressed by his wit. Sitting down with the grieving victims of the World Trade Center, Pentagon, and hijacked airliner crashes will be a different matter. Nevertheless, he jumps in with both feet when the Federal government creates the fund as a way to indemnify the airlines against potentially bankrupting lawsuits. Here’s the tricky part: for the fund to stave off class action suits, it should have 80% participation by the filing deadline. No problem Feinberg thinks. Then he has his first informational session with victims, where he shoves both feet in his mouth, up to his knees.

Soon, Charles Wolf emerges as a leader of the families and the chief critic of Feinberg’s one-size-fits-all formula for compensation. Yet, the legal bean-counter insists on his methodology, despite the heart-breaking one-on-one meetings conducted by his chief lieutenants: partner Camille Biros and Priya Khundi, a new associate, whose previous firm was headquartered in the World Trade Center.

There are a number of problems with Worth, but they all boil down to the central truth: a film addressing an event like September 11th really can’t make a mediocre job of it. This should be a serious, nonpartisan film, but Colangelo and screenwriter Max Borenstein just cannot resist depicting Pres. George W. Bush as a cartoon blowhard, which immediately cheapens the film. Yes, there are emotionally devastating moments when families discuss their loved ones, but the manipulation is glaringly obvious. Frankly, the real suspense of Worth is built around whether or not Feinberg will finally start to connect with people on a human level, before it is too late.


Michael Keaton does a nice job of conveying Feinberg’s cerebral nature, even though his mushy Boston accent is like fingernails on a blackboard. Stanley Tucci’s Wolf is almost impossibly wise, but he still has some effectively poignant moments. However, Amy Ryan and Laura Benanti truly represent the heart and soul of the film, portraying the empathetic Biros and FDNY widow Karen Abate, the first case Feinberg handles personally—and potentially the trickiest, due to her husband’s secret life. Yet, probably the most honest character would be Lee Quinn (played with scenery-chewing relish by Tate Donovan), a presumed composite lawyer, who segued from arguing for higher compensation for low income victims as a DC politician to representing high income victims demanding greater recognition of their bonus structures as an ambulance-chasing private practice attorney.

Throughout Worth, we can see the germ of a good movie in there, but the one on the screen never sufficiently comes together. There are interesting scenes scattered throughout Worth and you have to give credit to Colangelo for taking on a subject so deeply steeped in legal and economic details, but the resulting film just isn’t good enough. Frustratingly hard to recommend, Worth screens again today (2/2) in Park City, as part of this year’s Sundance.
Posted by J.B. at 6:00 AM