At this year’s Sundance, Angelica Sakurada sniffed out the buzziest films, allowing us to focus on our specialties. First, she provided a voluntary supplemental review of Lee Isaac Chung’s Minari, which went on to win both the Audience and Jury Awards. She follows up with a brief look at The Father, which is already considered a potential Oscar contender for Sir Anthony Hopkins and Olivia Colman, provided below as a courtesy to our readers: 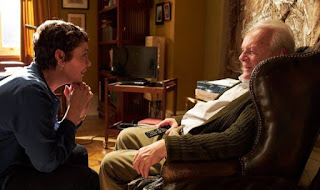 Most people have someone in their family or extended circles of relations who suffer with Alzheimer or other forms of dementia, so they understand how difficult it is to understand what happens inside that person’s mind and why they act the way they do. It is particularly hard (and many times miserable) to be the family member who is responsible for the care of the person suffering from such illness. That is a common, relatable experience that serves as the foundation for Florian Zeller’s The Father, which premiered at the 2020 Sundance Film Festival.

This is a very intelligent adaptation of a play from stage to big screen that makes the viewer question if they really understood the film in the end (and eventually want to watch it again to confirm). The use of small changes in scenarios and the original time-looping technique, shows in a unique and creative way the confusion of the affected mind and the suffering and confusion that result for the afflicted person. It really puts you in their head.


At the same time, The Father shows how hard is for a family member to keep their regular routine, while taking care of a loved one with dementia. The shining performance of Sir Anthony Hopkins could win him another Oscar and the same is true for Olivia Colman, who is also great as his only daughter struggling with the hard question of whether to care for her father herself, even if it means sacrificing her life, or accepting the hospice care option.

Significantly, this is the first film for the director Florian Zeller and the last movie from Sony Film Classic. It is a very emotional film for anyone who can relate to the theme. Highly recommended with standing ovation, The Father was a major highlight of this year’s Sundance Film Festival.