Frontline: The Battle for Hong Kong 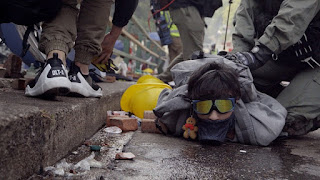 Hong Kong democracy protestors often shout their name and ID numbers when they are arrested by the HK police, because they are afraid they could very well disappear permanently. The cops have not been forthcoming about who they are holding, and footage of mysterious transports headed across the Chinese border have fueled grim speculation. That is the sort of helpful context that is completely missing from Frontline’s highly problematic report on the Hong Kong demonstrations, The Battle for Hong Kong, which premieres tomorrow on PBS stations.

Essentially, the hour-long report directed by Evan Williams endorses and promotes the general contention of Chinese Communist Party propaganda that there has been violence committed by “both sides.” To support this specious contention, they boiled down the last six months of social unrest to the attack on an off-duty HK police officer and another attack on a Mainland tourist, both of which were allegedly committed by overzealous democracy protestors.

Of course, the exposure of undercover cops trying to act as agent provocateurs is scrupulously ignored during Battle. Likewise, the report spikes any mention of the troubling incidents of police brutality that have surfaced. Carrie Lam and her enforcers do not want you to know about the allegation a 16-year-old teenager was gang-raped by Hong Kong police on September 27th—and Williams and the Frontline editorial staff dutifully oblige.

There are serious estimates 80% of Hong Kong residents have been exposed to tear gas. That’s only coming from the cops. At one point, the narrator suggests large segments of the population were turning against the protestors, yet the overwhelming victory of democracy activist in the late November 2019 local elections, in which pro-democracy candidates captured 389 seats out of 452 (despite widespread documented cheating by the pro-Beijing government) strongly suggests otherwise.


Yes, Frontline includes some representative figures, such as “Momo,” an activist nurse now suffering from PTSD, and Agnes Chow, a member of Demosistō (the party associated with Nathan Law and Joshua Wong), who is so well-known for her activism, she never bothers wearing a face-mask during her interviews. Yet, they also manage to find a knucklehead to give the impression the demonstrations are just about some kind of thrill-seeking rush.

Frankly, the rescue of students trapped during the siege of the Hong Kong Polytechnic University was the Dunkirk of our era. Yet, Frontline completely misses the scope, significance, and violent severity of the story. Instead, it tries to frame it as another case of “equivalent” violence.

Battle for Hong Kong is not merely bad journalism. It helps rewrite the narrative to assist the perpetrators of massive and prolonged human rights abuses. The worst part is as a PBS broadcast, it helps advance CCP propaganda with our tax dollars. If you want to know what it going on in Hong Kong, go to the source. Follow the Hong Kong Free Press and its journalists on Twitter. They are risking life and limb to bring the truth to the world, whereas Frontline obscures and dilutes the truth of the situation with Battle for Hong Kong, which is absolutely not recommended when it airs tomorrow on PBS.
Posted by J.B. at 6:00 AM