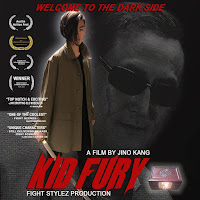 It is safe to say Kid Fury has father issues, but that is not unusual for wandering martial arts heroes. Fortunately, he has a quest to keep him occupied (always healthier than Freudian analysis). Kid Fury is out to recover a mysterious slightly Hellraiser-looking antique box. Word has it, the valuable antique is now in the hands of the titular villain, so that is where he goes in Jino Kang’s short film Kid Fury: The Phantom Witch (trailer here), which screens during the 2018 Another Hole in the Head Film Festival, in San Francisco.

It is tough walking the Earth as a lone warrior. Technically, Kid Fury is homeless, but he has a secret benefactor looking out for him—but maybe the shadowy figure does not really have the Kid’s best interests at heart. At last he knows where he stands with the Witch: in great peril. She might just be too much for the rookie to handle, but he shouldn’t have any problem getting through her henchmen first.

Kid Fury is a seriously grungy film, but in an appealing, vintage Cannon and Golden Harvest sort of way. It is also debatable which it is: the second installment of a short film series or the next episode of a web-series. The narrative is pretty straight-forward (although there will be some third act revelations, as well as lingering business from Kid’s first outing), but the real attraction is the fight choreography. Kang stages some bone-crunching confrontations that action fans will eat up like red meat, served nice and rare.

In fact, Kang is his own best ally, displaying massive skills and steely screen presence as the mysterious Master Huang. As Kid Fury, Timothy Mah has considerable chops as well, but Kang towers over him. It is always entertaining to see a master show-up the arrogance of youth, but Kang has the seasoned steeliness to make it convincing.

Whether it is really a short or a webisode, Kid Fury: The Phantom Witch is just good clean fun. The latest installment totally sells viewers on the concept and the characters, packing all kinds of martial arts goodness into 19 minutes. It looks pretty binge-worthy to us. Highly recommended for action fans, Kid Fury: The Phantom Witch screens Sunday (12/2), as part of AHIITH Short Film Collection III, at this year’s Another Hole in the Head.
Posted by J.B. at 10:15 AM