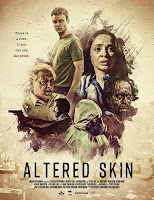 There is nothing like a zombie outbreak to overcome resistance to modern medicine. Gone are the days when Pakistani militants targeted vaccinating health workers, as documented in Tom Roberts’ Every Last Child. Now, one of the world’s largest Big Pharma companies is in Pakistan, thanks to the infection slowing patch. Business is booming, but they have a dirty secret an American expat is desperate to uncover in Adnan Ahmed’s Altered Skin (trailer here), which screens as part of this year’s Blood in the Snow Canadian Film Festival.

It is hard to say whether those inflicted with the MN-2 virus are full zombies per se, or just viral outbreak victims. Regardless, these “carriers” will eventually descend into a state of mindless rage. Tragically, Craig Evans wife, Dr. Insiya Zia will soon be one of them. She is currently in a medically induced coma after contracting the virus from a patient, but time is running out for her.

It is already too late for muckraking TV journo Shehzad Amin, but his widow is convinced Evans is the right person to expose her missing husband’s murderers. Evans is rather skeptical, but when he gets a whiff of something funny at the drug company, he starts investigating in earnest. Zia’s life might depend on what he uncovers. 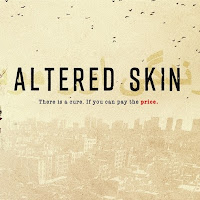 Although mostly in English, Altered was shot entirely in Karachi, by a mostly Pakistani cast and crew. Admittedly, there are some pacing issues, but the film’s professional-grade production values far exceed expectations. Ahmed maintains a gritty vibe of foreboding that is really quite impressive. The entire ensemble is also quite polished, particularly Aamir Qureshi, who is excellent as Amin in flashbacks and taped television reports.

As Evans and Zia, Robin Dunne and Juggan Kazim make a convincing married couple. He is also sufficiently credible as the dogged, bull-in-a-china-shop Westerner. Throughout it all, Ahmed gives viewers a vivid sense of nocturnal back alley Karachi. It is a dangerous environment, precisely because it is so easy to lose oneself in it. All things considered, it is pretty good. Recommended for fans of rage-berserk viral-mutant outbreak thrillers, Altered Skin screens this Friday (11/23) during BiTS 2018, in Toronto.
Posted by J.B. at 10:00 AM