Luciferina: That’s Her Name, Don’t Wear It Out 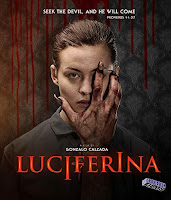 Everyone knows “Final Girls” are expected to remain virginal, if they hope to survive. However, that is in slasher movies. This is demonic horror. Evidently, the rules here are different—much different. A naïve novice will have to adapt quickly in Gonzalo Calzada’s Luciferina (trailer here), which releases today on DVD.

Even though Natalia was never baptized, she felt compelled to run off to a convent. Her parents were always a little odd. Frankly, one of the reasons she left was to get away from them, but that meant leaving her older sister Angela behind. Rather awkwardly, Natalia must return home when an accident kills their mother and permanently incapacitates their father. She receives a somewhat frosty reception from Angela, but her sister needs her to participate in a weird ayahuasca-consuming rite.

Apparently, some really sinister stuff was going on back home while Natalia was gone. The details are a little hazy, but it seems her parents were not that much different from John Cassavetes in Rosemary’s Baby and the mother in Satan’s Slaves. To uncover their lost memories and exorcise their parents’ bad mojo, Angela wants Natalia to travel with her and her obnoxious friends to a remote island where there is an abandoned, deconsecrated nunnery, to participate in a hallucinogenic-driven ritual presided over by a sketchy shaman. Right, let the healing begin.

Except, of course it doesn’t. Instead, you know who crashes the party. Up until this point, Luciferina was a moody film, filled with foreboding and a steadily rising level off tension, but from then on, it goes completely nuts. However, we locked in, whether we like it or not, because Calzada’s set-up work is so effective. The vibe of the first two acts is reminiscent of vintage John Carpenter, which is high praise indeed, whereas the third act is like Ken Russell on a crack cocaine bender.

Sofia Del Tuffo is distressingly vulnerable and altogether disarming as the deer-in-the-headlights Natalia. Yet, the dilapidated sets and ominous locations regularly overshadow the human cast. It is the sort of film that routinely defies gravity, like Wile E. Coyote, when he takes a wrong turn over a gaping chasm. Easily recommended for fans of demonic supernatural horror, Luciferina is now available on DVD.
Posted by J.B. at 10:00 AM