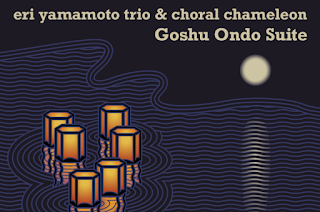 It’s like writing for a small town. Composing for a fifty-piece chorale group and jazz trio is no small undertaking, especially when it is your first work incorporating vocals in any form, but that is the sort of daring jazz is supposed to represent. Eri Yamamoto lives up to that ethos all the time, but she takes it to a new level with the Goshu Ondo Suite, an extended composition produced and performed in collaboration with Choral Chameleon. If you want to hear the second-ever performance tonight you had better be prepared to wait-list for some improvised seating, because all tickets are sold out, just like last night’s premiere.

There have been attempts to fuse jazz and chorale music before, most notably some of Dave Brubeck’s sacred music. Yet, Goshu Ondo works particularly well, because it is all so well integrated and unified. This is not like other works attempting to fuse jazz with disparate styles that sounds distinctly sectional, wherein the jazz combo plays the head, the “special guests” play, the jazz musicians solo, the guests come back in, and then the combo restates the head. The musicianship could be great, but you could take them apart and listen to them separately without losing anything.

That is not the case here. You need both parts to make sense of what’s happening. It is all intimately married together right from the start and becomes even more so as the piece progresses. The final movement of the continuous suite might be the exception that proves the rule. The melody sounds like it could be adapted for Yamamoto’s trio more easily than the rest of the suite, but having chorale group layered on top more than doubles its power—and then its time to dance (don’t worry, the moves aren’t much more complicated than the Hokey Pokey, but it looks somewhat more elegant).

Goshu Ondo is inspired by the song and dance performed during traditional Japanese summer festivals, so it is fitting the performances have such a festive atmosphere—there will be green tea (supplied directly from Japan by Nishimura Banchaya Honten) and sake (from Brooklyn), as well as many visitors from Japan in attendance. Choral Chameleon was able to unlock Eri’s rhythms (which can be tricky), because they are clearly in the spirit, grooving to the music. Her regular trio-mates, Ikuo Takeuchi on drums and Dave Ambrosio on bass (two of the best in the business) are rock-solid and on-the-money, like they always are. Again, this is the world premiere of some ambitious music, but they sound like they have been playing it all their lives.

Eri Yamamoto and her trio are terrific musicians, who always sound great together, but this is an opportunity to hear them in a totally different setting. The acoustics of the Paul Taylor Dance Studio are also quite nice. It is the place to be tonight for jazz fans, but if you miss it, AUM Fidelity will be releasing a live recording.
Posted by J.B. at 3:00 PM