DOC NYC ’18: Welcome to the Beyond 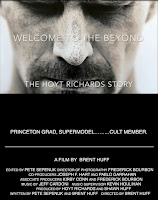 Hoyt Richards should have had more fun during the 1980s. He was considered one of the first male supermodels, on a similar level as Cindy Crawford and Stephanie Seymour, with whom he worked. Unfortunately, Richards was simultaneously a member of a New Agey cult with its own alien mythology. Richards explains how he fell prey to the cult and how he escaped in Brent Huff’s Welcome to the Beyond (trailer here), which screens during this year’s DOC NYC.

A former Ivy League college athlete, Richards had a rugged New England kind of look that would have particularly suited Ralph Lauren, who did indeed use him in some of their campaigns. He was one of the only male models who had any fraction of the publicity devoted to his more famous women colleagues. Life should have been great for him, but he was under the sway of Frederick Von Mierers, the guru of the “Eternal Values” cult. According to his spiel, Von Mierers and his followers were really enlightened alien beings from the spiritual center of the universe, who had come to Earth to save it from our tacky, evil ways, but of course, he was the only one who retained his former memories.

Yes, it is crazy, but Von Mierers shrewdly planned his seduction of Richards. In fact, he played an instrumental role encouraging Richards’ early modeling career. Huff also clearly establishes how some of the dysfunctional dynamics in Richards’ family made him particularly susceptible to the tactics typically employed for cult recruitment. As a result, Richards was bankrolling Eternal Values and faithfully returning to Von Mierers’ Manhattan pad each night, instead of partying into the early morning hours.

The story of Richards’ cult ensnarement is pretty crazy stuff on its own, with the supermodel glamour giving it additional sex appeal. He is also remarkably candid in his interview segments, readily admitting how deeply he was sucked in and how badly it warped his perception. The film definitely makes its point: if someone who has as much going for him as Richards did could still be vulnerable to cult manipulation than the same is probably true for just about everyone else too.

Unfortunately, there is an inescapable scruffiness to the film, despite a surreal animated sequence illustrating the loopy Eternal Values creation myth. Partly, that is because so much of the footage was clearly shot on consumer-grade video, particularly that of Richards’ mother and Von Mierers, while they were still alive. There might be no way around that, but whether it is fair or not, the resulting film has a look and vibe that is probably better suited to television than theatrical screenings.

Ironically, Richards was envied by men and desired by women at a time when he was leading a double-life. There are important lessons to be drawn from his experiences, but the presentation still just isn’t very cinematic—a more distinctive score definitely would have helped (we’re always happen to recommend artists). Still recommended for its real-life drama and Richards’ often painful honesty, Welcome to the Beyond screens this Tuesday (11/13), as part of DOC NYC 2018.
Posted by J.B. at 6:01 AM