As record labels go, Blue Note almost had it all. They had the greatest artists, the best recording sound, the most striking covers, and the most legit street cred with fans and musicians alike—everything except money. Yet, that was okay with label co-founders Alfred Lion and Francis Wolff, because they were only interested in thee music. The history of the label that has consistently brought us “the finest jazz since 1939” is finally done justice in Eric Friedler’s outstanding It Must Schwing: The Blue Note Records Story (trailer here), which screens during this year’s DOC NYC.

Lion and Wolff were forged a life-long friendship in their native Germany, based on their mutual love of jazz. Swing was the style of the day, but their Blue Note recordings essentially codified the “Hard Bop” sound as we now know it. Yet, their sessions still had to swing, or “schwing,” as it sounded with Lion’s thick German accent. He was the first to arrive, with little prospects and hardly a penny to his name. Nevertheless, Lion started recording and issuing sessions in 1939, starting with the Boogie-woogie pianists, Meade Lux Lewis and Albert Ammons. Even today, they sound like a freight train coming at you.

Even hardcore aficionados might not understand how close Wolff cut things when he finally joined Lion in New York. According to Blue Note producer and archivist Michael Cuscuna, Wolff was on the last ship that left Hamburg without Gestapo inspection. Indeed, even those who think they know the Blue Note story pretty well might be stunned (and deeply moved) by some of the revelations regarding Wolff.

On the other hand, any jazz fan worth his salt peanuts will recognize Wolff’s arresting session photography. They are a major reason why vintage Blue Note LPs are so desirable as objects in their own right. Of course, what was in the grooves was even more important—and it always sounds wonderfully warm and clear, thanks to the techniques perfected by Blue Note’s regular engineer, the legendary late Rudy Van Gelder.

Frankly, Friedler made his documentary just in the nick of time, because it represents Van Gelder’s final interview. He pretty much gets everything else right too. Whereas Sophie Huber wastes a lot of time in Blue Note Records: Beyond the Notes flailing around, trying to make political statements, Friedler zeroes-in on Lion and Wolff and their relationship to musicians. We hear from nearly all the surviving greats, including Sonny Rollins, Herbie Hancock, Wayne Shorter, “Sweet Papa” Lou Donaldson, Kenny Burrell, Ron Carter, Sheila Jordan, and perhaps most memorably, Bennie Maupin (but not Dr. Lonnie Smith, which is odd, considering how photogenic he is). 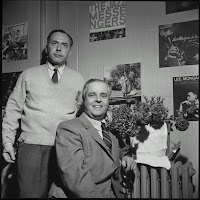 Granted, Schwing is not perfect. Like Huber’s film, it largely overlooks Blue Note’s commitment to free jazz (or at least freer, more exploratory) artists, aside from a brief discussion of Jackie McLean. Friedler completely ignores the 1980s re-launch, but instead concentrates on Lion’s tenure with the label, up through the sale to Liberty Records and Wolff’s death in 1972. However, the narrower focus allows Friedler and his interview subjects (nearly all of whom knew Lion or Wolff personally) to do justice to that classic Hard Bop era.

Naturally, Schwing sounds terrific, thanks to the extensive Blue Note recordings heard throughout (including classics, like Coltrane’s “Blue Trane,” Horace Silver’s “Song for My Father,” and Sidney Bechet’s still staggering rendition of “Summertime”). It is also unusually dynamic visually, thanks to Tetyana Chernyavska and Rainer Ludwigs’ black-and-white animated sequences, recreating pivotal moment in the label’s history. Again, Friedler and company just get it right. It is a pleasure to spend time with the film and it will send you out of the theater eager to revisit all these classic recordings that really ought to be in your collection. Very highly recommended, It Must Schwing: The Blue Note Records Story screens this Saturday (11/10) at the SVA Theatre, as part of DOC NYC 2018.
Posted by J.B. at 6:00 AM