Malcolm’s life is like 50 First Dates, but with bad guys. Apparently, he wakes up everyday with his memory wiped, but it is only temporary condition his wife assures him. Still, things could get awkward for the both of them if anyone were to show up looking for the valuable item he is holding. As far as he knows, it could be Marsellus Wallace’s soul, because he can’t remember. Yet, matters turn out to be even more complicated in screenwriter-director Tomas Street’s Fugue (trailer here), which screens as part of this year’s Blood in the Snow Canadian Film Festival.

According to Helen’s reassures, everything will be fine eventually, as long as Malcolm keeps taking his pills and listening to her trips down memory lane. Obviously, the situation is not ideal, but people have endured worse. However, he keeps getting weird flashes of Deja vu or something. Of course, his situation really takes a turn for the worse when masked home invaders barge in. At this point, Street pulls a game-changing whammy on the audience, upending most of our assumptions.

Street’s secrets are not revolutionary, but the way he links together the film’s bifurcated structure is very clever. It is hard to go into detail without giving the game away, but several cast members are really terrific as characters who are more or less playing roles in the film. They definitely fool us along with their on-screen audience. 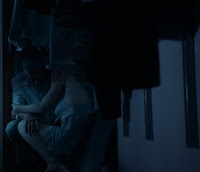 Regardless, on the basis of his star turn as Malcolm and his work in Lifechanger, Jack Foley is poised to become the next genre star to achieve cult popularity (oddly, both roles involved mysterious pill-popping). His distinctive grey locks certainly also help him stand out. Yet, Laura Tremblay goes toe-to-toe with him and nearly steals the show as Helen. The small ensemble of co-stars are key collaborators, helping to sell each twist and reveal, especially Kristen Da Silva and Michael Lipka—as other people.

Street is totally having one over on viewers, but since he shows respect for our intelligence, we don’t mind be played for fools, so to speak. He and co-editor Sean Danby, along with the continuity person deserve enormous credit for hiding all the seams. Highly recommended for fans of dark, twisty psychological thrillers, Fugue screens Monday night (11/26), as part of this year’s BiTS.
Posted by J.B. at 6:00 AM