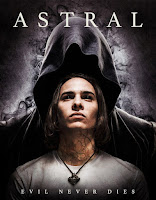 Although it was not a smash hit, Rodney Ascher’s scary-as-heck documentary The Nightmare seems to have quite a legacy, by ushering in a bumper crop of sleep paralysis-shadow people horror movies. This is one of the better ones, because it has some new angles all its own. What starts as a science experiment takes on some truly sinister implications in Chris Mul’s Astral (trailer here), which opens this Friday in targeted cities.

Alex Harmann’s lecturer, Gareth Powell is sort of to blame. When he starts talking about dimensions greater than our own, it gets the moody Royal Holloway, University of London student thinking (for once). The notions that we might pass across to a higher dimension when we die and astral projection might be a way to communicate with the dead particularly fascinates the twentynothing. Powell strenuously cautions him against the practice and then gives him tips on how it might be done.

Harmann still grieves for his late mother years after her death. In fact, it is a rather sore point, because his father only just revealed the suicidal circumstances of her death. Thanks to the super-helpful Powell, Harmann manages to astrally project, but he doesn’t get very far into the 5th Dimension or whatever. However, he starts to see ominous shadow people soon thereafter. When his doubting flat mates also start glimpsing the flickering shadow entities, he knows he has a problem.

Despite the down-market look of the U.S. one-sheet, Astral is a rather smart and compelling marriage of mysterious scientific inquiry and demonic horror. In terms of tone, a decent comparison would be the original Flatliners, especially given the collegiate setting (RHUL’s Founder’s Building is indeed enormously cinematic). Eventually, it goes full-bore into horror, but it is a smooth and logical transition. Mul keeps the tension steadily mounting, even though some of the woo-woo entity effects are a little cheesy. You can sort of think of it as a cousin to the various sequels to Edwin Abbott’s Flatland, but with demons and night terrors.

The greatest drawback is lead actor Frank Dillane, who comes across like a churlish, charisma-challenged drip as Harmann. It is utterly impossible to understand what the torch-carrying Alyssa Hodge sees in him, particularly since Vanessa Grasse portrays her as a rather intelligent and forceful young person. However, Trevor White and Juliet Howland add a lot of entertaining horror movie color as Powell and the third act medium, Michelle Collins, respectively.

This is definitely an over-achieving film, which is always a happy surprise. It should put Chris Mul and co-screenwriter Michael Mul on the map. Astral is a good film that will leave genre fans curious to see what they do next. Recommended with enthusiasm, Astral releases this Friday (11/23) in select theaters and on VOD.
Posted by J.B. at 10:00 AM